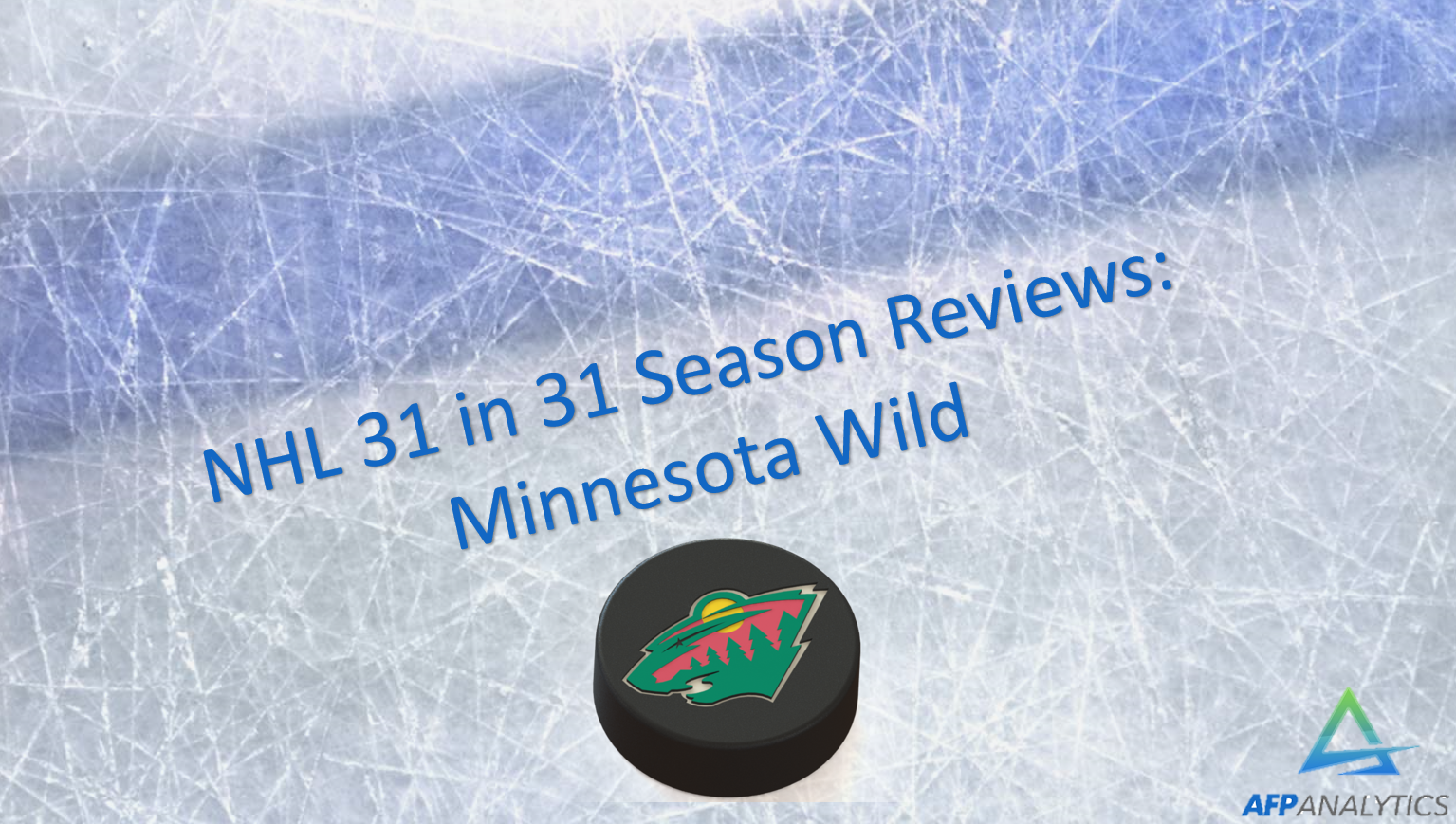 Next up in our 31 in 31 season review is a look at the Minnesota Wild. The Wild have been a fine team for many years now but once again fell to make any sort of deep playoff run. The constant wheel spinning and the perceived mismanagement of the Vegas Expansion draft seem to be the reasons Chuck Fletcher was replaced as GM by Paul Fenton. Fenton will have a tough job in front of him as ownership just made it clear that making the playoffs is not good enough. Unfortunately for Fenton, that is exactly the type of roster he has and making major tweaks to it will likely pose a challenge. In fact, the underlying numbers don’t look favorably at the Wild and they could be a team primed for a fall in the standings next season

I am going to start this section by somewhat validating Fletcher’s decision in the expansion draft. One of the popular picks by pundits for the Golden Knights was Las Vegas native Jason Zucker. Fletcher opted to protect him and work out a deal to ensure neither Eric Staal or Matthew Dumba would’ve been taken. I think Minnesota would’ve regretted losing Staal and Zucker this season as taking one of those players out of the lineup would’ve likely would’ve resulted in the team missing the playoffs. Yes, both of those players were that important for the Wild this season. Dumba probably wasn’t quite as valuable this season but long-term, I think he would’ve been a piece Minnesota regretted losing.

I have already foreshadowed two of the players who were bright spots for the Wild this season in Eric Staal and Jason Zucker. Those two players in addition to Nino Niederreiter and Mikael Granlund were by far the Wild’s best forwards. Staal has always been thought of as a top line talent so it might not be much of a surprise that he performed at the level he did. When Eric Staal was on the ice, during 5v5 play, the Minnesota Wild controlled the shot differential 3.51% better. He also scored at a rate of 2.48 points per 60 during 5v5 play. That’s pretty good for a player who is 33 years old and signed to a contract with a $3.5M cap hit. I still don’t know how Minnesota was able to sign Staal for that bargain of a contract.

Jason Zucker has been a player steadily on the rise for the Wild and this season really took off. It can be argued that Zucker was the team’s best forward this season. Zucker was second, to Staal, in points per 60 at 2.1 during 5v5 play. The team was also 3.87% better when he was on the ice, which was the second-best among forwards behind Niederreiter. Zucker and Eric Staal seem to have found tremendous chemistry as both players played at a higher level when they played together than when they were playing a part. Zucker is arbitration eligible and a year away from unrestricted free agency. The Wild have to make a decision on him this offseason and should likely be looking to lock him up long-term.

I’m willing to bet that Nino Niederreiter is still likely underappreciated. Some might think this is crazy to say but Niederreiter is one of the best two-way forwards in the NHL and should be in the Selke conversation every season. The fact that Minnesota has him under contract for two more season for $5.25M is an absolute bargain, provided he can stay healthy, which until this season had not been an issue for him. This season Niederreiter had an absurd Relative Corsi For % of 6.92%, meaning the team was controlled shots that much better when he was on the ice. That’s an elite level of play. I can’t believe that the team was able to buyout four seasons of unrestricted free agency and only one arbitration year at that price. Niederreiter would likely fetch at least $7M (probably higher) this offseason had he hit the open market.

I also want to touch on the Wild’s best defenseman. No, it wasn’t Ryan Suter but rather Jared Spurgeon. When Spurgeon was on the ice the Wild better controlled the shot differential at a rate of 4.47%. Suter also was solid but that should be expected of him.

If you want to look at the underlying statistics the Wild were not a good team this season and we can point to many players why. However, I am going to start with the two trades Fletcher made last offseason. The first being the trade made with Vegas to provide protection, allowing Vegas to draft Erik Haula along with acquiring Alex Tuch in the expansion draft and the second with the Buffalo Sabres that sent Marco Scandella and Jason Pominville to Buffalo in exchange for Marcus Foligno and Tyler Ennis. As I previously alluded to, the expansion draft snafu might not be as bad as it is being made out to be but it certainly has to sting to watch those two players become key components for a top team. The trade with Buffalo was not good. Foligno was actually decent but his ceiling is not higher than a third-line player. Tyler Ennis could be a top six player but has sadly seen his career derailed due to injuries and he has never bounced back. I’m not sure banking on an Ennis turnaround was the smartest way to approach that trade. I think Minnesota needed to get a better return for one of their defenseman and that didn’t have to be Marco Scandella.

The defenseman who Minnesota likely should’ve looked to trade was Jonas Brodin. Looking at his possession numbers for his career, show that he has been average to below average. This season, the Wild, already a poor possession team, were 1.74% worse when Brodin was on the ice. I think Brodin likely would’ve had greater value than Scandella because of his age and I don’t think Scandella would’ve performed any worse. Not that this was a franchise-altering trade but this poor return and decision on which player to move just added another nail to Fletcher’s coffin.

I don’t want to completely dig into Zach Parise because I feel bad for him because of the number of injuries he has overcome. However, for the Wild, they are going to have to hope for another compliance buyout in the new CBA or for Parise to have an injury that prevents him from playing so the team can stash him on Long-term injured reserve. Unfortunately, Parise still has seven years left on his contract (that would keep him on the roster until he is 40). This season he only played 42 games and the Wild were 2.57% worse when he was on the ice. The worst part is smart money is on a 33-year-old player, with extensive injury history not suddenly improving their level of play.

Yikes. Paul Fenton has some heavy lifting to do (maybe the team should’ve hired Rick Dudley to do it) if the team is going to dramatically improve. Once the cap is finalized the team will likely have around $12M in salary cap space. That sounds manageable until you see Jason Zucker and Matt Dumba are both arbitration eligible. Zucker could eat up half of that cap space alone and the only option besides signing him is to trade him as there is no way they can justify walking away from an arbitration award if it gets that far. If you’ve read everything thus far, I think the Wild would take a massive step back without Zucker so in my mind, they have no option but to pay him and ideally, they would lock him up to a long-term deal as they can’t afford to go short-term and go through this again in a year or two. Matt Dumba will also likely earn a decent arbitration award should it get that far so Minnesota could be in big trouble at the end of arbitration season.

Waiting for those awards also would severely hamper their ability to construct a roster so the Wild will likely have to be proactive and take action sooner than later. Obviously, they have to clear salary as soon as possible. The likely starting point for shedding salary is Tyler Ennis. I can’t imagine a team trading for Ennis alone. The Wild would likely have to entice a team with an asset to take Ennis off their hands. A buyout could be another option to create immediate cap savings but it would also add a year of cap pain. Doing so would generate $2.4M in cap space.  At this moment I would estimate the Wild will likely have approximately $30M in cap space next offseason but could easily see a third of that eaten up by Zucker and Dumba. Potentially add in Ennis’s buyout and the team is likely down to $18M – $19M in space with Eric Staal potentially needing a new contract. It should be manageable so I would definitely expect an Ennis buyout this offseason.

Buying out Ennis might give them just enough cap space to work with but it still doesn’t give them much wiggle room. It certainly doesn’t provide them much flexibility to shake up their roster, basically forcing them to have to match salary if they make any trades, which really puts them at a disadvantage. The reality is the Wild have to sort Zucker and Dumba out ASAP because they can’t afford to let them play out. They have to know if they are going to count $10M, $12M, or more toward the cap. If I’m spit-balling, I can’t see that dual counting for much less than $10M combined. Even with an Ennis buyout, the team is looking at $4M to $5M max in salary cap space. They likely are going to have to hope their young players can energize their roster but with a new GM in charge, a massive roster shakeup can’t be ruled out. However, if Fenton wishes to put his own stamp on the roster, I wish him good luck!

Please be sure to check in again tomorrow as we take an in-depth look at the Anaheim Ducks. If you enjoyed this review, please follow us on Twitter, @afpanalytics, and share it with your friends!