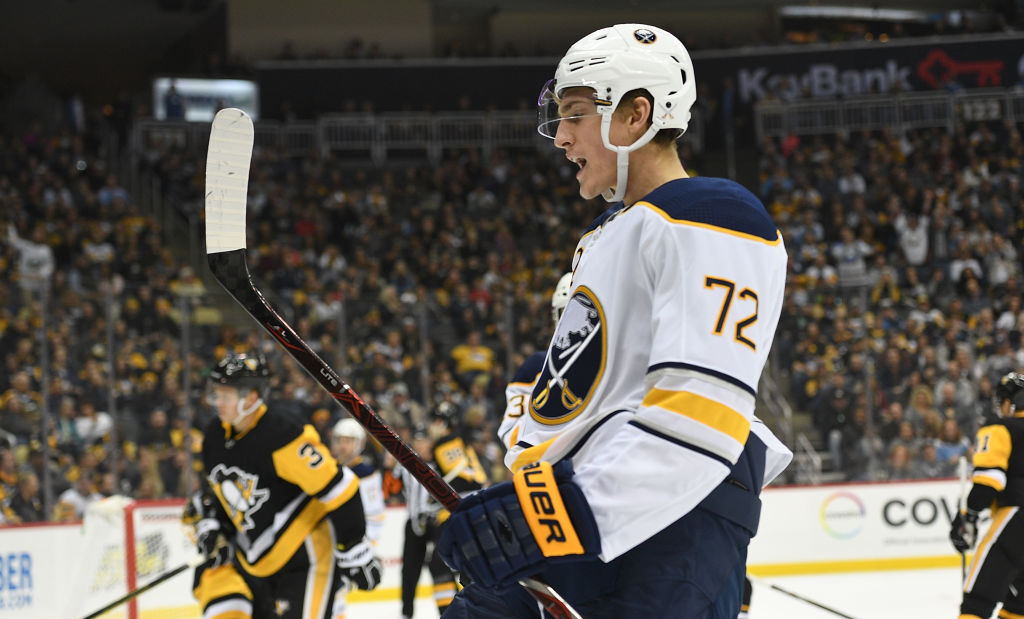 Breaking down a key play from Sabres Forward Tage Thompson

At the beginning of the season I was critical of Tage Thompson’s play but Thompson has played incredibly well as of late. Many Sabres fans will think back to his power play blast and shootout goal against Detroit as signs of the progress he has made. He has also looked much more comfortable in all three zones as he has generally moved with purpose. However, there is one play that Thompson made in the Sabres’ 11/19 game against the Pittsburgh Penguins leading to Casey Mittelstadt’s game tying goal that really caught my eye. When I was watching the game live,  I didn’t originally know which player made it. I thought it was the eventual goal scorer, Mittelstadt but when I got a chance to go back and look at it I discovered it was Tage Thompson. This isn’t going to be a lengthy blog post but I wanted to take time to highlight this player in a manner where I could provide the details necessary to appreciate this play that I wouldn’t be able to do succinctly on Twitter. Below I have a gif of the play I want to look at (thanks to my intern Zack Ryan for putting it together). This play occurred around the 9 minute mark

This play from Thompson is INCREDIBLE with maybe a little lucky. Let me set the scene for you. The Sabres have been battling back in hopes of tying the game at four. They are playing their third game in four nights and it is starting to show during this shift. Pittsburgh had a few decent chances and Thompson and his linemates had gotten caught on the ice for an extended shift and the Sabres were being peppered in their zone. Kyle Okposo won a battle on the boards to start the puck up ice to Thompson. As you can see in the clip, Okposo moved the puck up the ice to Thompson but his pass was a little off. There are Penguins on both sides of Thompson ( 72 in the middle of the screen) so the margin for error is nearly zero. If this play isn’t made perfectly, the Penguins will keep the puck in the zone and possibly add a dagger goal.

This pass to Thompson was far from perfect. It was well behind him. Thompson was able to use his long reach to get his stick on the puck. However, taking a pass behind you while skating forward at full speed isn’t the easiest play to make and I doubt every player on the Sabres could make it. However, Thompson has the soft hands required to control the puck and knock it forward. Not only did he move it forward, he had to move it between his legs because of where Okposo made the pass. The skill Thompson showed to perfectly execute the controlled zone exit is impressive in itself. However, he didn’t stop there. As Thompson skated the puck out of the zone, two Penguins closed in on him from the side while one was in front and one was bearing down from behind. If Thompson had turned the puck over or iced it after getting it out of the zone, it would have been understandable but no! Thompson was able to move the puck back to Kyle Okposo who continued up the ice and eventually carried the puck in the zone. I believe from watching this over and over that Thompson did indeed intend to make the short little touch pass to Okposo but it is possible the Penguin backchecker may have caused him to lose the puck and it bounced luckily to Okposo. Regardless, Okposo moved the puck into the zone and a strong cycle and forecheck from the Sabres eventually allowed the team to get the puck to Mittelstadt who scored to tie the game at four.

Gif created using giphy with video from NHL.tv. Image via the Buffalo News