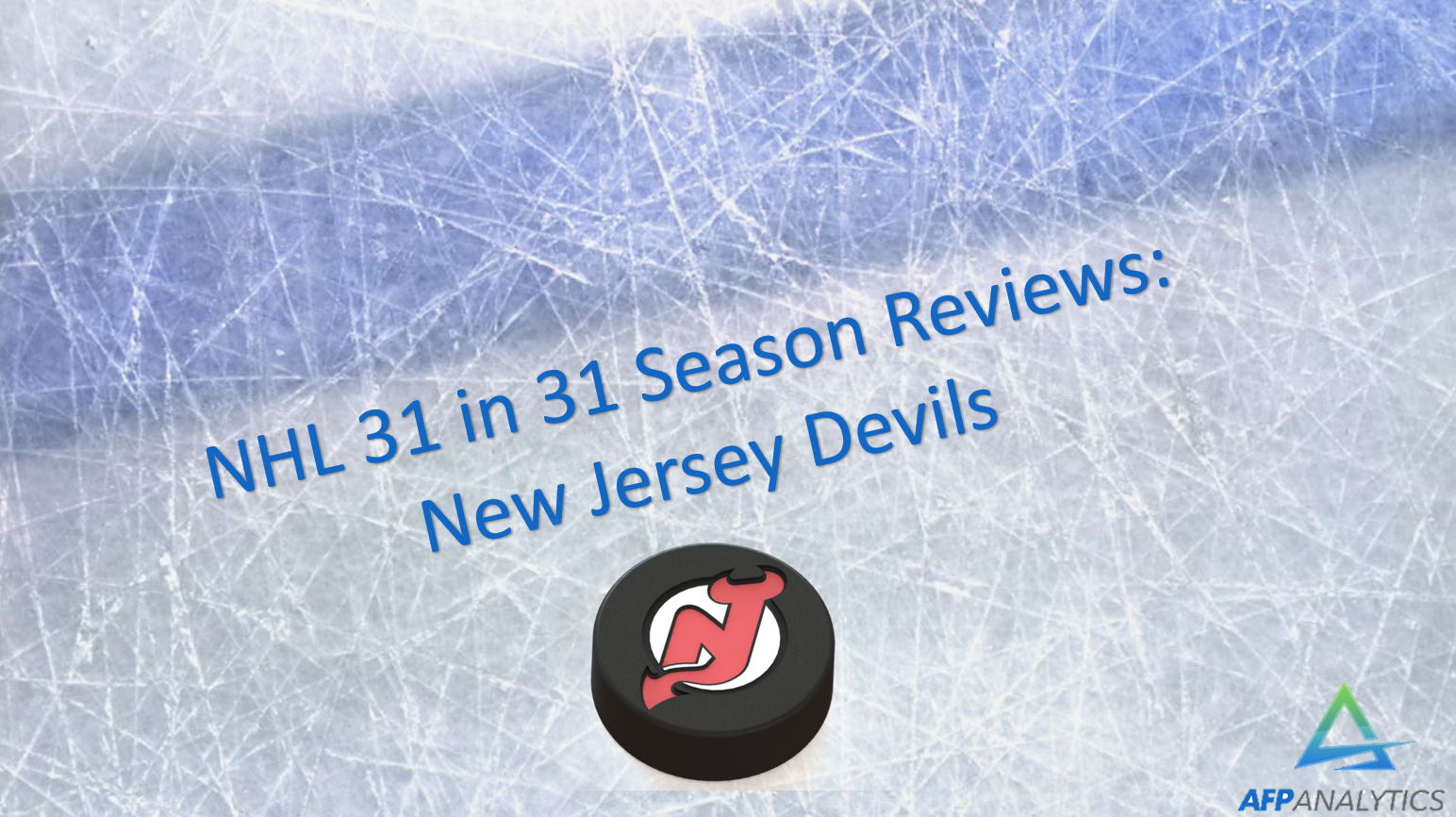 Next up in our 31 in 31 season review is a look at the New Jersey Devils, a team who finished last in the Eastern Conference and won the draft lottery last offseason only to turn around and make the playoffs. These aren’t the same New Jersey Devils I grew up watching as they played a fast-pace, offensive focused game, a far cry from the slow-paced defensive minded game they had previously played.

If I am being honest, the Devils were probably lucky to make the playoffs as their possession numbers were 11th worst in the league as they had a Corsi For % of 48.59%. The reason they likely overcame this low possession number is they dominated on fast breaks, led by Taylor Hall, who is in discussion to be this year’s most valuable player. Hall was incredible and clearly a player the Oilers wish they still had to ride shotgun with Connor McDavid. He doesn’t have eye popping possession numbers, with a Corsi For % of 51.28% and a Relative Corsi For % of 3.85% during 5v5 play, but the team wouldn’t have sniffed the playoffs without him. His scoring numbers were ballooned by his strong power play scoring but he was still one of the best players in the league this season and trying to deny it is silly.

The next player to discuss is Will Butcher, the rookie defenseman who New Jersey signed as a free agent after he played out his four seasons at the University of Denver and failed to reach an agreement with the Colorado Avalanche. He also was the Hobby Baker winner in his senior season. However, teams saw him as undersized and many thought he would likely be AHL bound this season. However, he not only made the Devils out of training camp but he exceled all season.

Butcher made the Devils better when he was on the ice during 5v5 play. How much better? The Devils had a 6% higher shot share when Butcher was on the ice, best on the team.  He also had the best Corsi For % during 5v5 play, 53.14%. He also led Devil defensemen in points per 60 during 5v5 play. I’m not saying he should win the Calder Trophy (rookie of the year) but I don’t think Butcher has gotten enough national recognition for what he has accomplished this season.

I am going to conclude this section with a blanket shout out to the young forwards on the team. Nico Hischier, Pavel Zacha, Miles Wood, and Stefan Noesen all were quality players for the team this season, which has to excite Devil fans considering their age. All four of those players finished with an even or positive Relative Corsi For %. What this means for the Devils is these players all improve (or in Zacha’s case maintains) the level of play when they are on the ice. The even better news is these players are likely to get better the next few seasons as well. Wood and Noesen are restricted free agents this summer so the Devils will have to make a decision on them, whether to go short-term or long-term.

If the team sees Noesen in their plans going forward, which they should, they should look to go long-term with him this offseason. If you have read any of my other work, you should know that I would also favor going eight years for Wood. For a player who relies heavily on his speed, there has to be some concern that once he hits 30, he will be unable to maintain his style of play. However, a long-term deal this summer would end when he is no older than 30. Jesper Bratt also should be highlighted quickly as he performed well considering he was a sixth-round pick but his possession numbers are concerning. The team was 3% worse when he was on the ice. Considering the Devils were a team that finished low in possession to begin with, it is not a great sign that the team was even worse when Bratt was on the ice.

I think it is hard to discuss a lot in this section considering the team went from worst in the conference to the playoffs. The definite place to start though is with goaltender Cory Schneider. Schneider got off to a good start this season but struggled mightily at the end of the season, being replaced as the regular starter by Keith Kinkaid. Though Schneider did regain his form in the playoffs as he was the far superior goalie for the Devils in their first-round playoff loss. The decision to make Kinkaid the number one was backed up by the numbers. Kinkaid was basically average during 5v5 play while Schneider allowed 2.5 goals below average. During all situations Kinkaid saved 6.43 goals above average while Schneider saved 3.49 above average.

The next player I am going to discuss is Steve Santini. To be frank, the team got shelled when he was on the ice. Santini had the worst Relative Corsi For % out of any player to play at all for the Devils and he played 36 games! When Santini was on the ice, the Devils allowed 12.12% more shots. It still might be a little early to write Santini off but it also is concerning that his possession numbers regressed from last season in only 50 minutes more of ice time. The one positive to look at for Santini is he did improve his goals for % from 40.54% to 48.78%. During 5v5 play this season, Santini was only on the ice for one more goal allowed than the team scored. The Devils have to be hoping to Santini progress next season.

Finally, I will quickly touch on Andy Greene. It looks like father time has continued to take his toll on the Devils’ captain. Greene has been a negative possession player for the last four seasons and has been on a steady decline in that time span. Greene still has two more years at $5M remaining on his contract; the Devils have no one to blame but themselves as they signed Greene to an extension even after his play started to decline. The silver lining for the team though is Greene’s contract will be off the books when Taylor Hall is due a new contract. Even though that $5M is an overpayment for a player with Greene’s level of performance, it shouldn’t have a major impact on the team’s offseason plans the next two years. They should have plenty of cap space to work with.

The Devils’ top priority this offseason needs to be locking up their restricted free agents. I would definitely look to give Wood and Noesen long-term deals and retain Santini for another year to see if there is anything there. Honestly, I don’t know much about Blake Coleman, the last of the Devils’ RFAs but his numbers make him out to be a competent player who likely can be signed relatively cheaply. He might not be a player to sign to a long-term contract but it might be smart to buy a few unrestricted free agent years (maybe sign him to a three-year contract).

The team likely will not get all of their RFAs locked up before unrestricted free agency begins but that shouldn’t really matter as the team moves into the offseason with close to $25M in salary cap space. The team has three unrestricted free agents where I think they have a tough decision. Patrick Maroon was a tremendous fit for the Devils when he came over in February but is 30 years old and is likely looking to cash in on his recent strong play. Matt Cane’s (@Cane_Matt) contract model has Maroon getting just over $5M per year on a four-year contract. I think Maroon could end up as high as $6M per when all is said and done. It might sound crazy but the Devils could easily fit that contract in provided they only go two years, which is the most I would feel comfortable with for Maroon anyways. The same model also predicts Michael Grabner will sign for four years and just under $4M per season. The Devils could easily pay them both but if they are going to choose one, I would lean toward Grabner as he fits well in the speed game the Devils have started to play. He also will likely come at a better value.

The Devils could use an upgrade on their blueline. John Moore has been a fine player for the team but I’m sure the Devils could do better. Even if they bring Moore back, they still could use a quality defenseman. Ideally, they retain Moore and banish Greene, Micro Muller, and Santini to the bench/minors. Mike Green could be a great fit for the Devils on a short-term deal. John Carlson also could fit the bill but I don’t think he will come at a reasonable price for the team. Although unlikely, the Devils are also a team that probably could make a strong swing for Erik Karlsson. They have the cap space and prospects to make it happen but I don’t know if giving up that much capital would be a wise decision.

The team also could use a top center to play with Taylor Hall (who couldn’t?). Hall spent the most time this season with Nico Hischier, who could become a great player but probably isn’t quite ready to be the first-line center on a quality playoff team, which the Devils obviously hope to become. Clearly, every team with cap space should be talking with John Tavares but the Devils are a team who definitely have the ability to make it work. The question is whether ownership will want to spend close to the cap. If they miss out on Tavares, they might be smart to look to sign either Paul Stastny, Tyler Bozak, or Joe Thornton to a short-term deal. I don’t know if any of those players can still play top line minutes but they could provide a nice 1B option to Hischier.

Please be sure to check in again tomorrow as we take an in-depth look at the Columbus Blue Jackets. If you enjoyed this review, please follow us on Twitter, @afpanalytics, and share it with your friends!