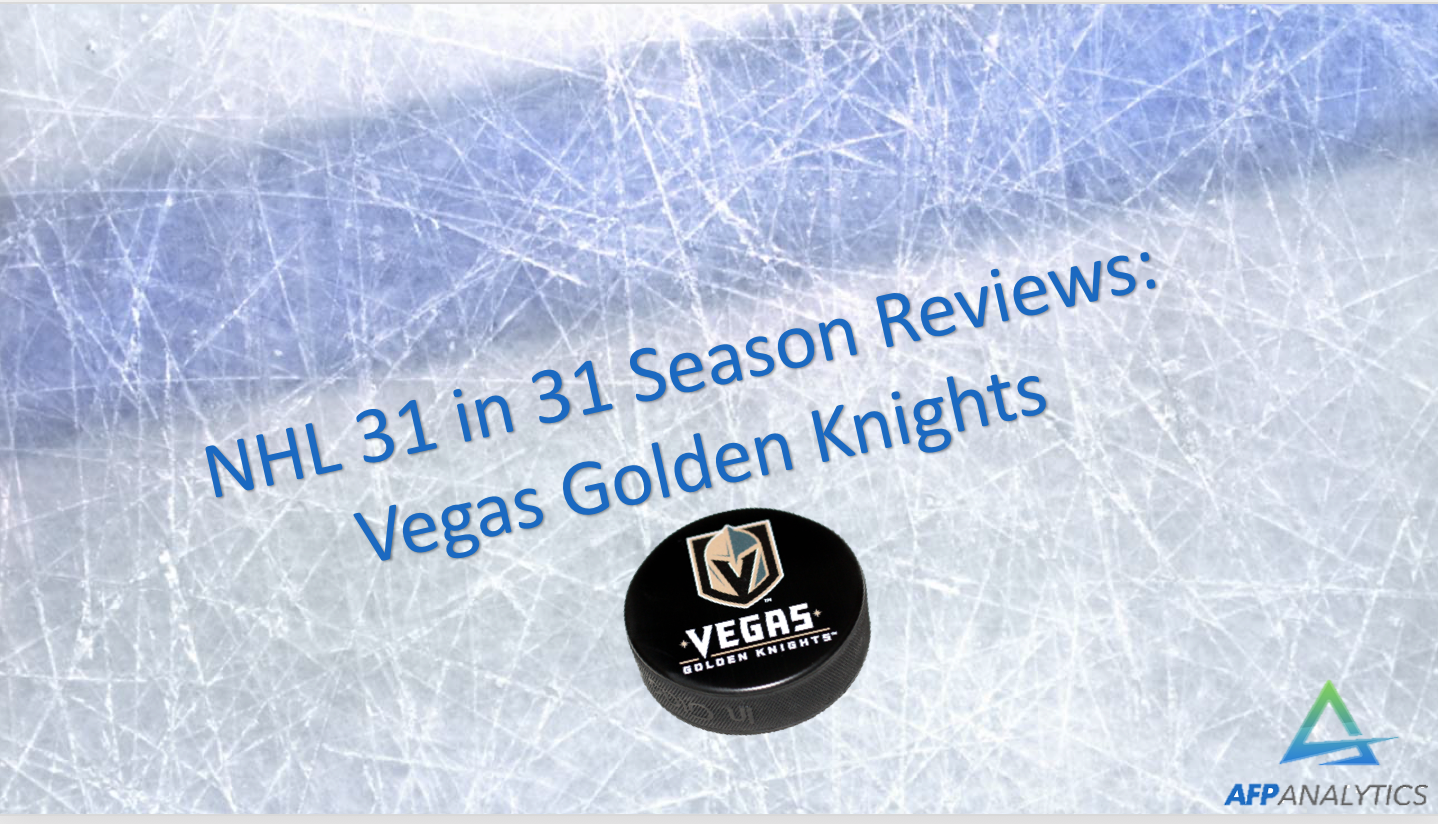 Next up in our 31 in 31 season review is a look at the Vegas Golden Knights, the record-setting expansion team that fell three wins short of winning the Stanley Cup. I think it is important to preface everything I write about the team with the fact that I, like many others, expected the team to be bad. They throttled my expectations. I think using their success as a way to insinuate the rest of the league’s GMs are dumb is a little off base. Dale Tallon messed up in a big way. Columbus’s and Minnesota’s decisions weren’t fantastic. The Islanders might have made the worst decision outside of Florida but it isn’t as talked about because they didn’t end up with a player on Vegas’s roster. I will maintain that the Knights could have been even better with a few different draft decisions but, again, who knows?

Well, the entire team was a bright spot this season. No one was expecting them to be as good as they were. Some of their playoff success can be attributed to luck as Marc-Andre Fleury put up insane numbers until the team reached the Stanley Cup Playoffs. The team finished 13thin the league in Corsi For % at 50.84%. If they perform at that level consistently in seasons to come, they should be a perennial playoff team. The playoffs will always be a different nature as much of it comes down to the “luck” a team is getting, whether that being a high save percentage or high shooting percentage. To prove this has some validity to it, let’s look at the top PDO (shooting % + save %) in the playoffs. This year Vegas was first, Washington 2nd. Last year, Pittsburgh (winner) was second. The year before they were seventh while their opponent, the San Jose Sharks (runner-up) were first. In the 2014-2015 season, Chicago (winner) was second, 2013-2014 the Rangers (runner-up) were second and the Kings (winner) third. In the lockout-shortened 2013 season, Boston (runner-up) was second and Chicago (winner) was fourth. Basically, I want to make sure it is clear that putting too much stock into Vegas’s playoff run is misguided as a deep playoff run is usually due to luck.

As I said, I could highlight most players here for Vegas but I don’t have the space to do so. I will start by highlighting Vegas’s first line. Reilly Smith has shown evidence of being a quality player in the past and Jonathan Marchessault had been trending in that as well. However, William Karlsson came out of nowhere. The combination of the three was nothing short of magical. A case could be made for the line of Smith-Marchessault-Karlsson being the best in the entire league. They combined to score 53 goals during 5v5 play. To put that into perspective, the Buffalo Sabres, as a team scored 119 goals. That’s 45% of the Sabres’ goals! The line was also effective defensively, improving the team’s possession numbers by 3% when they were on the ice. You can’t do that if you’re pinned in the defensive zone every shift. Marchessault’s and Smith’s contracts will look like bargains for years to come if they maintain this level of play (I’m talking to you Dale Tallon!). Karlsson is a restricted free agent with arbitration rights so he will definitely be due a raise. If the team is smart and seeking to minimize their future cap hit, they should look to lock Karlsson up long-term (more on this idea this summer)!

The other player I have to highlight is Colin Miller. Miller took advantage of favorable offensive zone starts to be the best possession player on the team. Miller had an impressive 55.37% Corsi For % and a 6.45% Relative Corsi For %. Miller also led all defensemen in scoring during all situations with a very respectable 41 points. Miller, like Karlsson, is a restricted free agent with arbitration rights. The team should probably look to get him locked up to a five or six-year deal that would keep him with the team into his early 30s. You don’t want players much past then.

I’m not going to really dive into players here because, how can you? Most of the players played well above what was expected of them. Instead, I’m going to spend a little time on how I think the Golden Knights almost won in spite of the moves made by George McPhee. I can’t knock McPhee too much as the team he envisioned at the time of the expansion draft worked much better than anyone thought they would. However, I think there were instances where the team could have gotten more than they did.

Taking any unrestricted players without being enticed to do so seemed like a waste to me. I don’t think Vegas had to draft Derek Engelland in the expansion draft. He would’ve signed with them anyway. They could have added another player from Calgary. Connor Brickley and Chris Thorburn are selections that I think should have yielded Vegas more. They also needed to better manage their assets at the beginning of the season. They took too many NHL players and didn’t have deals arranged to move them, forcing them to keep Vadim Shipachyov in the AHL and eventually frustrating him to go back to Russia. Because they ended up making trades from a position of weakness, they got a lower return than they should have on some players.

The other decisions I have to question McPhee on were his trades leading up to the trade deadline. If you had told me after last season that Ryan Reaves would find himself on two different teams in 2017, I would have thought the Blues waived him, a team claimed him, waived him, and then a second team claimed him. Instead, he was traded twice for fairly substantial returns. For whatever reason, McPhee thought he couldn’t pass up the opportunity to add Reaves and was willing to help facilitate the Derick Brassard trade to the Pittsburgh Penguins. I don’t know why McPhee would’ve wanted to help the Penguins as at the time, Vegas was a clear Stanley Cup contender and so was Pittsburgh. Second, the return they got to make this trade happen and in exchange for losing $2M in salary cap space, next season was terrible.

The other trade to touch on is the acquisition of Tomas Tatar. The team gave up a first, second, and third-round pick for an average player signed to a so-so contract with term. They could’ve added Evander Kane or Rick Nash or Paul Stastny for less! I think McPhee was going for the home run by acquiring Erik Karlsson and panicked at the last minute so they decided to grab Tatar. Had they gotten a better return for what they gave up for Tatar, it could have resulted in them lifting the cup.

Dear George McPhee, don’t dole out a massive free-agent contract to anyone not named John Tavares. Your friend, Kyle. Seriously Vegas, you have one of the best future cap situations in the league, don’t go and blow it.

The team’s top priority has to be getting their restricted free agents taken care of. Karlsson, Miller, and Shea Theodore are promising young players who should be part of the team for years to come. Tomas Nosek and William Carrier are also restricted free agents and seemed to be tremendous depth players that should continue in that role next season. They also have to look at their unrestricted free agents. James Neal and David Perron are the only ones they should be considering bringing back. Giving out any contract that lasts longer than three years to either player would be a mistake. Otherwise, I wouldn’t have a problem with them bringing either player back. I guess I shouldn’t gloss over Brandon Pirri, who seems like he should be a good fit with the way Vegas plays but only played two games (scoring three goals), so making any sort of decision would be based off a very limited sample.

Vegas has a gift and a curse. As I’ve been discussing, Vegas has a great long-term cap situation, which is thanks in large part to them not having many long-term contracts on their books. They are currently due to have seven unrestricted free agents next offseason, with many of them being key components to their team. I think the team would be wise to work out extensions with them this offseason so they have certainty going into next season.

I don’t think Vegas should stand pat this offseason. They definitely could use a top pair defenseman and probably could use a quality second-line center to complement Marchessault. Vegas certainly has the ability to swing for the fences in a trade as they have assets and cap space. I’m going to go ahead and say Vegas is likely the best fit for an Erik Karlsson trade (assuming he agrees to a contract extension). They would likely have to offer a package revolving around Shea Theodore and one or two of their top prospects. If only they still had their 2018 first-round pick, I think an easier case could be made. As adamant as I have been about Vegas not adding any bad contracts, I might make an exception and take on Bobby Ryan if Ottawa would lower their ask for Karlsson. Ryan is still a decent player and Vegas would have the ability to work around that contract.

The other player I wonder about for Vegas is Ryan O’Reilly. I think there is still a struggle in evaluating the importance of faceoffs but Vegas was brutal in the playoffs, especially in the Stanley Cup Finals. They lost nearly every big faceoff and O’Reilly would certainly solve that. He also would be a great second-line center to be the more defensive complement to Marchessault. He would also serve as a first-line insurance policy if Marchessault regresses at all (unlikely). I think a trade revolving around Cody Eakin, Alex Tuch, and a top prospect is likely the starting price. I do question if O’Reilly would have the foot speed to play the style of hockey Vegas played this season but otherwise, I think he would check a lot of boxes for the team.

This offseason will be almost as important as the last offseason for the franchise. The team needs to be careful to not overreact to their immediate success. The team likely had a plan in place when they started and they should stick to that plan. Dipping into free agency would allow the team to continue to build their organizational depth and assets but will likely end up with a bad contract on the books. Trading is a way to add higher end talent (Tavares excluded) on better contracts but doing so will deplete their organizational depth. It will take a fine touch to navigate the offseason correctly. McPhee’s decisions have mostly paid off, but at some point, the questionable decision-making is going to catch up to him so my advice: proceed with caution.