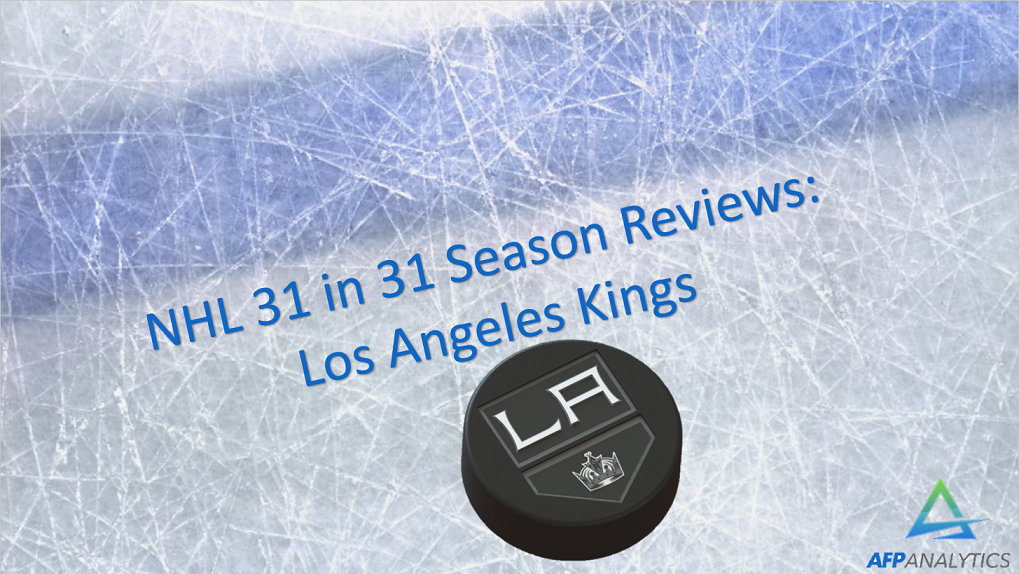 Next up in our 31 in 31 season review is a look at the Los Angeles Kings. After an offseason of change to their hockey ops department and coaching staff, the Kings looked poised to regain their championship form only to be steamrolled by the Vegas Golden Knights in the first round of the playoffs. Their playoff loss is probably more indicative of how the team stacks up in today’s NHL rather than their fairly successful regular season.

This section has to start with the revival of Dustin Brown. Brown continued to be a top possession player during 5v5 play, leading all forwards in Corsi For % and Relative Corsi For %. He also scored at the third best rate during 5v5 play of his career. This season he was propelled by a higher shooting percentage than he has put up the previous three seasons. As these reviews are meant to be a quick overview, I can’t point to definite reasons why he shot better this year than the previous three but I have a few theories. First, he likely was due to progress as he had shot well below his career average the last few seasons. However, this might not simply be a regression to the mean discussion. I have a hypothesis that I have no way of backing up. I wonder if a new coaching staff and playing style propelled Brown to shoot at a much better rate than ever before. I think this is something that would need to be looked at through video but I have already spent way too much time writing these reviews so I can’t do that at the present time. If anyone reading this would like to prove or debunk my theory please do!

Brown’s revival certainly was a bright spot this season for the Kings but I’m not sure if fans can be overly excited regarding Brown. This season Brown definitely produced at a level worthy of his $5.875M cap hit. However, at age 33, I don’t think it is feasible to expect Brown to continue to improve his play. It has to be concerning for the Kings’ organization that his contract will be on the books for another four years. I wonder if the Kings would look to explore moving him while his value is high. Though with Brown being able to list eight teams he would accept a trade to, it seems pretty unlikely a trade could be work without Brown’s complete cooperation.

The next player to highlight here is undrafted rookie free agent, Alex Iafallo. The Kings have been tight to the cap the past few seasons and have been in need of top-line talent. For whatever reason, they haven’t had much success finding that talent internally. Enter Iafallo. Iafallo didn’t produce the same number of points compared to some of the Kings other top players but he did put up some of the best possession numbers on the team. In fact, Iafallo ranked second to Brown in Corsi For % and Relative Corsi For %. When Iafallo was on the ice, the Kings were a better team. The hope for the Kings is the scoring will follow and it likely will. Even if it doesn’t, the Kings have to be ecstatic that Iafallo was able to more than hold his own while playing top line minutes as a rookie. The even better news is Iafallo was as good when he played away from Anze Kopitar as when he played with him, meaning any argument looking at Iafallo as being carried by Kopitar is invalid.

The final player I am going to highlight in this section is Johnathan Quick. For those who haven’t been following along, I want to digress quickly to make sure I note that just because a player is not highlighted in this section it doesn’t mean they had a bad season. I have used this section to highlight players who outperformed expectations. Anze Kopitar and Drew Doughty were great but that’s what was expected of them. So now you’re probably wondering why I would discuss Quick because many people expect him to be great as well. I’m going to let you in on a secret, Johnathan Quick really hasn’t been that good of a regular season goalie. Shhhh, don’t tell anyone. However, this season Quick was phenomenal. He saved 11.53 goals above average this season, fifth best in the league. Out of all the years to talk about Quick as a Vezina candidate, this was probably the year. Goalies seem like they can certainly play at a high level well into their thirties so maybe the Kings won’t completely regret that long-term contract Quick signed but they are going to want more seasons like this one to be truly comfortable with it.

As I alluded to in the last section, I am using these sections to highlight players who truly excelled or truly disappointed. I think most of the Kings’ players performed pretty much as expected. I also want to commend the Kings for recognizing the players who were struggling and not play them. However, I will quickly touch on a few players here.

I will start with Jeff Carter. His possession numbers were not great. In the games he played, the Kings performed worse, at least in terms of shot generation and suppression, when Carter was on the ice. I don’t know if it is something worth reading too much into. I think the bigger disappointment is that he missed most of the season due to injury. If Carter had been healthy, the Kings probably would’ve finished higher in their division and avoided Vegas in the first round. I would have made them the favorite against the Ducks so in the big picture, Carter’s injury has to be a little disappointing. If Kings’ fans want to look at the bright side, Carter’s injury isn’t one that should raise concern for a long-term injury issue. The pessimistic side is Carter is 33 years old and still has four years remaining on his contract. However, a $5.27M cap hit, with no trade/move clause and a lower salary than cap hit, should give the Kings flexibility with Carter going forward if they decide they need to move him.

Probably the biggest concern for the Kings and their fans is the sudden and fairly drastic decline in the play of Alec Martinez. For his entire career, Martinez was a dominant possession player and suddenly this season, the Kings were shelled when he was on the ice. When Martinez was on the ice, the Kings gave up 5.56% more shots than when Martinez was on the bench. That was worst among regular Kings defensemen. Much like my discussion on Brown, I don’t know if I have any explanation for Martinez’s poor season. Luckily, he is signed to a relatively team friendly contract with a cap hit of $4M per season but he will be is now on the wrong side of 30 so expecting a dramatic improvement in play next season might be unrealistic.

I understand the Kings’ thinking in trading Marion Gaborik for Dion Phaneuf but I don’t know how smart of a move that will turn out to be. Phaneuf was not good for the Kings after he came over in the trade, putting up possession numbers very similar to Alec Martinez. Three more seasons of a $5.25M cap hit is not desirable. I don’t know if the slight difference in cap hit was really worth moving Gaborik for Phaneuf.

The Kings are an interesting team. They basically have their roster set for next season. They have 12 forwards, six defensemen, and two goalies under contract for next year. For a team that probably could benefit from some changes, I don’t think this is a great position for them to be in. I also don’t see any players that are overly attractive trade options that I would think the Kings would be open to trading.

The biggest need for the Kings is an improvement to their bottom six forwards. Most of the players they currently have are uninspiring. I wonder if they could work out a short-term deal with a player like James Neal, David Perron, or Patrick Maroon. They could slot in the team’s middle six and push another player down the lineup, which would probably help solve some of the team’s depth issues. Otherwise, I don’t really know what the team is going to do. They will have around $9M in cap space to work with but don’t really have spots for a player to come in and play.

I think the smart play for the Kings this offseason would be to look to build up their farm system. The team could use an infusion of youth and speed but I don’t know who currently would fit the bill in the Kings’ organization. This is where they could be wise to use their cap space this offseason. The Kings’ could take on a big money contract with a year left along with an asset, whether that is a draft pick or prospect and then bury a player in the minors (Brooks Orpik maybe). Their number one priority has to be keeping cap space clear next offseason when Drew Doughty will likely be drawing big money.

Overall, I expect a very quiet offseason in Los Angeles aside from possibly announcing a Drew Doughty extension.

Please be sure to check in again tomorrow as we take an in-depth look at the Pittsburgh Penguins. If you enjoyed this review, please follow us on Twitter, @afpanalytics, and share it with your friends!