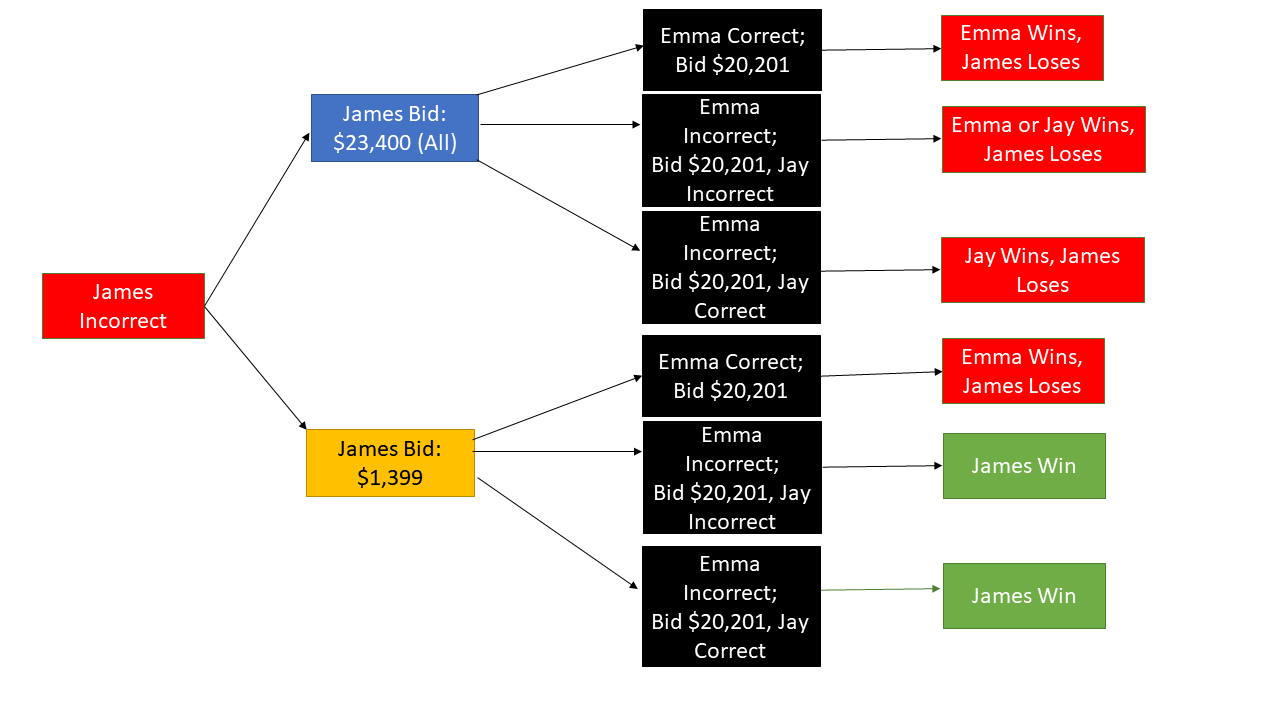 The internet is buzzing over the loss of James Holzhauer on Jeopardy!. There are theories swirling that he tanked the game. People are questioning why he wouldn’t bid it all as he has been the most aggressive player in the history of the show. However, even though Holzhauer was aggressive, he was not reckless or careless. Every big bid he made never jeopardized (bad pun alert!) his chance of winning. His strategy going into Final Jeopardy during his fateful loss was just like every other bid he made, aggressive but not reckless. Here you wonder how I could say he was being aggressive when he bid a measly $1,399. He bid as much money as possible to still give him the best chance of winning.

Going into Final Jeopardy, Holzhauer was in second place with $23,400 ahead of Jay Sexton’s $11,000 and Emma Boettcher’s $26,600. With this in mind, let’s go through what should have been each player’s thought process when they made their final wager.

The Thought Process of Emma Boettcher

Being the leader in the clubhouse makes things easy for Boettcher. She knew she needed to bid $20,201 to close Holzhauer out. If she gets the question correct, she wins. If she misses the question, she should lose if the other players bid correctly. Unless it is a category she felt she knew absolutely nothing about, the $20,201 bid is a no-brainer. She knew it and her opponents should have known it.

The Thought Process of Jay Sexton

Jay Sexton was the complete wild-card in this game. He had accumulated enough money to be a factor in Final Jeopardy but not enough to catch either player unless they were to miss the question. Bidding $0 should have been in strong consideration for Sexton since he needed both players to miss to win anyway. However, if he wanted to be aggressive without being reckless, he could have bid $4,600, which would have given him $6,400 is he were to miss the question, which would have kept him $1 ahead of Boettcher had she bid the $20,201 as expected and incorrectly answered Final Jeopardy. If he followed this thought process, he should have had no concern for Holzhauer’s bid. His bid of $6,000 was, to put things kindly, head-scratching.

The Thought Process of James Holzhauer

Holzhauer knew Boettcher would bid $20,201, just enough to close him out. Sexton could have bid as much as $11,000 that would have left him with $22,000 if he answered correctly. So long as Boettcher made the correct bid, Holzhauer knew he had no chance of catching her unless she missed the question. Instead of worrying about what he couldn’t control, he worried about what he could control, which was ensuring Sexton could not over take him. The most Holzhauer could bid to ensure that was $1,399, which if he was incorrect, would have left him with $22,001, just enough to close out Sexton had he bid it all. Below, I have created a decision tree visual that shows the paths James could have taken to victory.

As you can see in these decision trees, James cannot win if Emma Boettcher gets the question correct. However, a door opens if Boettcher misses the question. James is then guaranteed a win in two scenarios. The easiest is he gets the question correct. The other way is if he makes the bid he did. An Emma miss ensures he wins, regardless of how he answers the question. By making the bid he did, Holzhauer gave himself the best avenue to win. He did not tank the game. He did not lose on purpose. He played the game at the highest level and luck was not on his side that day with the daily doubles.

KYLE STICH is the Director of AFP Analytics.  In addition, Mr. Stich is a tax specialist and Director of Operations at AFP Consulting LLC, whose clientele include professional athletes performing services on three separate continents. Mr. Stich earned his Master of Science in Sport Management with a Concentration in Sport Analytics from Columbia University in 2017. He earned his undergraduate degrees in Accounting and Sport Management from St. John Fisher College in 2015, where he has served as an adjunct professor teaching Sport Finance and Baseball Analytics.﻿