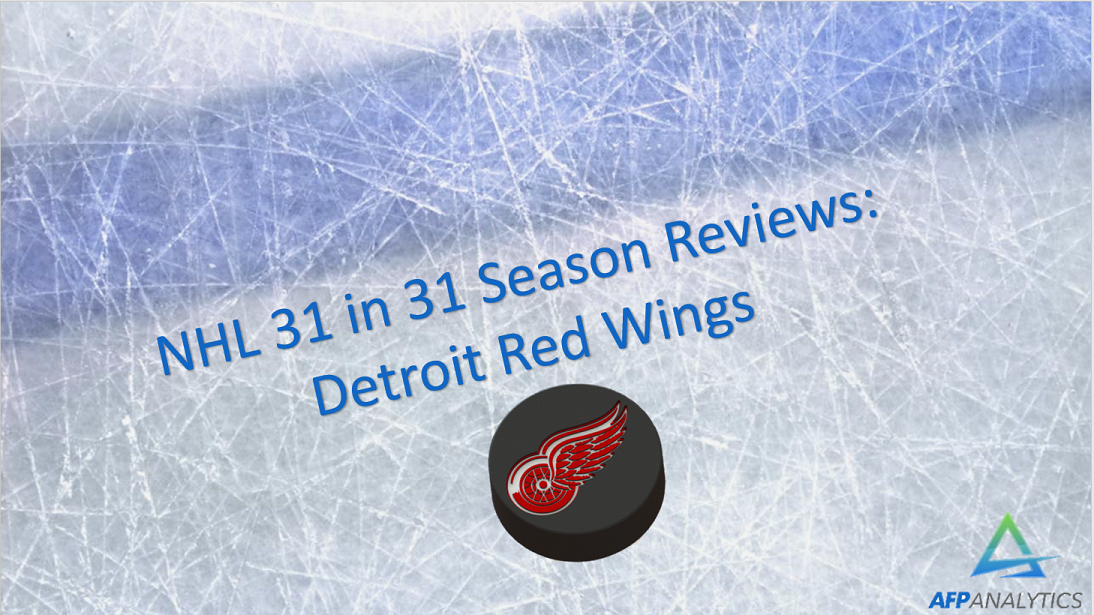 The Red Wings appear to be entering a bit of a down time after one of the most impressive playoff streaks in the history of the sport. The Wings came into this season without playoff expectations and the team performed right on par with what experts and fans expected before the season started. Questionable decision making may have set the franchise back a few years and this puzzle does not look like it will have a quick fix.

Dylan Larkin entered the NHL in 2015-2016 straight from University of Michigan and made an immediate impact. After a minor sophomore slump, he was able to score 61 points this past season and developed into a more well rounded offensive player. Larkin’s CorsiFor% was exactly 50% which is impressive for a player who has the reputation as offensively minded. His expected goals for was .08 goals/20min below his expected total. With a few more fortunate bounces it is reasonable to expect Larkin to increase his goal total next year.

Andreas Athanasiou is the second of the three young players who saw significant minutes for Detroit this season. He was able to produce 33 points, 33 of which were at even strength. I would expect him to see more powerplay time in the coming years and his point total should increase by 10-15 points per season. He has shown flashes of excellence when controlling the puck and is was able to carry the puck into the offensive zone 5.6 times per 20 minutes of ice time. He is a player who excels on the rush, so his skillset looks like it should be a good fit for the modern game.

Lastly, Anthony Mantha deserves a mention in the bright spots section. He was arguably the biggest bright spot in Detroit this year. After producing 36 points in 60 games in 2016-17 he played 80 games in 17-18 and totaled 48 points. He was a key powerplay contributor but did mange to score 35 even strength points. He was an elite powerplay scorer, using his heavy frame to get to the front of the net he had a True Shooting Percentage of 20.8%. Mantha figures to be a net-front presence in Detroit for years to come.

Trading Thomas Tatar was a good start for Detroit but there were other players the Red Wings could have shipped out of town at the trade deadline. Justin Abdelkader produced 34 points while counting for $4.3M dollars against the salary cap. The point production does not match the cost, but more importantly Abdelkader is already 31 years of age and the new emphasis on speed makes him a player who many teams would no longer consider a top six forward.

Mike Green had a fine season on the back end, but he figures to leave the team in free agency this July. Niklas Kronwall will not be going anywhere anytime soon. The 37-year-old carries a $4.8M dollar cap hit that figures to take him off the radar for any potential trade. It may seem unfair to call Kronwall a disappointment because of his age, so we can place the blame on the front office for locking up the aging defenseman for so long. He still was reliable to clear the zone when he got the puck, but the younger faster forwards gave him a tough time in his own end. He was not able to block many passes or accumulate many successful stick checks per game. The issue is not so much his performance as much as it is his age and contract status.

The Red Wings had an uneventful season. The team performed right on par with their expectations, their top players produced to the level fans can expect and the rest of the team… well they played 82 hockey games. The team only had two players score more than 20 goals and there are plenty of concerns for the team heading into the offseason.

Remember the 3 bright spots from above? Well all three of those players are entering RFA status and the team has roughly $18M in cap space heading into free agency. The team will likely lose Mike Green so there is a top 4 defenseman and 3 young forwards the team will need to sign with relatively limited funds. Players such as Henrik Zetterberg (age 37, $6M), Frans Nielsen (age 34, $5.25M), Johnathan Ericsson (age 34, $4.25M), Trevor Daley (age 34, $3.17M) combined with Kronwall and Abdelkader are all aging and have handcuffed management. In the perfect world the Red Wings would be able to move most, if not all, of these players to open cap space and roster spots for younger talent. Unfortunately for the Red Wings it takes two teams to make a deal and I do not see other teams forming a line to trade for aging players with large cap hits.

This means the Red Wings cannot be throwing money around in free agency like they may have been willing to do in the past. Some of the contracts mention above expire after the 18-19 season and the team will have much more cap flexibility next summer. Focusing on resigning their own talent should be the priority this offseason.

The Red Wings will have a decision to make this offseason. Assuming they are only willing to sign one player to a long term deal they will have to decide between Larkin and Mantha. From an age standpoint alone, lets assume it is going to be Dylan Larkin. Larkin is only 21 years old and has shown he can produce at the NHL level. Assuming the Wings choose to go straight to the long term deal we can assume it would look something like 6-8 years with a cap hit between $6 and $7M. This would be a fair deal for both sides and would bring the available cap space down to $12M. We are assuming if the Wings chose Mantha instead of Larkin he would receive a similar deal.

This leaves two deals to be signed, assuming the two are shorter term with smaller AAVs (let’s say 3.5 each) the Wings are looking at $5M of cap space left. In other words, the team is not in good standing financially. The Wings will have the same team returning next year with $5M of cap space to replace green and resign a handful of other potential free agents. Tyler Bertuzzi is an interesting prospect who has been plagued by injuries but has also reached RFA status. The team would have to pony up some of the $5M if they want to keep them in the fold.

Even if the Red Wings do what is suggested and sign their own talent and steer clear of signing other free agents they will have tough decisions to make. With all due respect to the young core is it reasonable to expect a core of Larkin, Mantha and Athanasiou to compete for a Stanley Cup. I do not think that is possible, they are lacking a true number one center.

However, the best way to acquire a star center is through the draft and the Wings are loaded with picks. This year the team has 7 picks in the first 3 rounds. Their own pick is sixth and they have ammunition to either move up or to stockpile picks for the coming years. I would recommend the Wings try to add as many first round picks as possible in 2019 and perhaps even 2020. Their roster now is made up of fine complementary players, but they will still need a true star if they hope to return to the glory days.

Please be sure to check in again tomorrow as we take an in-depth look at the Vancouver Canucks. If you enjoyed this review, please follow us on Twitter, @afpanalytics, and share it with your friends!