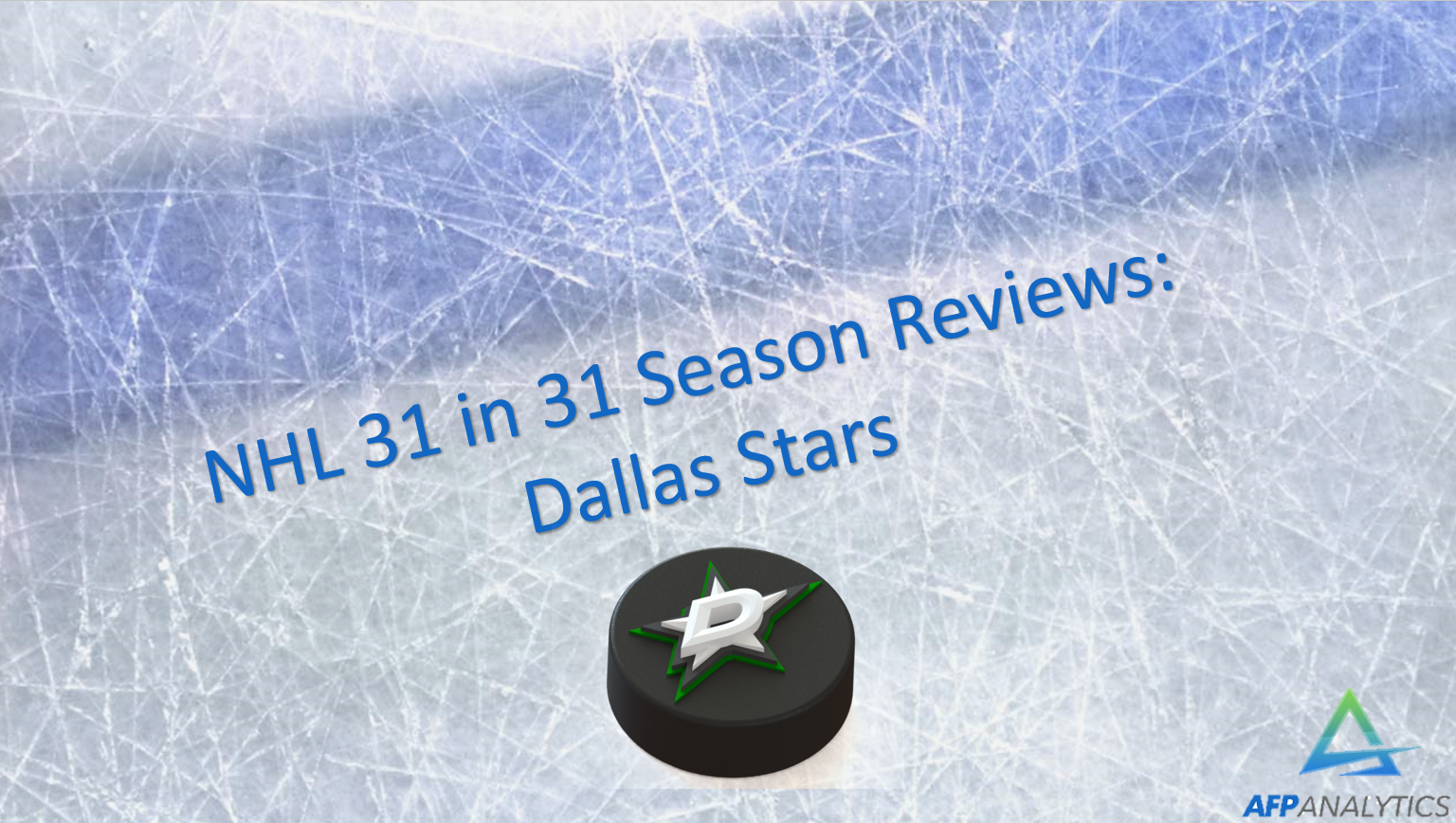 The Dallas Stars headed into the season with playoff aspirations but ultimately came up short in 2018. The team spent to the cap and played an exciting brand of hockey and even had a Corsi% better than 50% but the goaltending and play in their own end let them down. The team did spend to the cap which makes them an interesting team to look at moving forward.

Trading for Tyler Seguin was one of the smartest moves in recent memory. Why the Bruins would trade a potential superstar at such a young age is beyond me, but Seguin has rounded into elite form in Dallas. He had 78 points in 82 games and 51 of those points came at even strength. Seguin has a reputation as a high end offensive talent, but people do not realize that he is responsible in his own zone as well. He has a quick stick and can block passes and deny entries into the offensive zone at a rate that is comparable to some of the best defensive forwards in the league. His possession numbers in all three zones is very good and it does not come as a surprise that his offensive zone numbers are phenomenal. The best players can control the puck when entering the zone. Seguin can take it to the next level, 65.1% of his controlled entries have a successful play after. He had a true shooting percentage of 6.3% which is quite good considering the volume of shots he is taking. He frequently can get into high scoring areas and create chances for the Stars.

Jamie Benn and Alexander Radulov are two older forwards who were able to contribute as well. Benn has been a Star for a long time and Radulov was brought in this past offseason to help bolster to attack. Benn has a $9.5M dollar cap hit but produced 80 points and had a Corsi% of 52.2%. Radulov had a 53% Corsi and scored 27 goals, meeting the lofty expectations the team had when they signed him. His expected goals for was .3 but his actual was .26. This means that Radulov missed some opportunities or the goaltenders made great saves against him more often than they did against other shooters. The law of averages suggests that next season if he stays healthy he will score more than 27 goals. Radulov and Benn are locked up to long term deals and will be important forwards for Dallas as they look to get back into the playoff picture.

The defensive play was not where it needed to be, but John Klingberg was not to blame. Klingberg is one of the best offensive minded defenseman in the league and he is responsible in the defensive end. He plays on both the powerplay and penalty kill and registered 8 goals and 59 assists. His Corsi% was 54.1% against some of the toughest competition with a 35% offensive zone start percentage. He is arguably the best powerplay quarterback in all of hockey. He ranks near the top of the league in many point producing categories when the team has the man advantage. He can control the entry into the zone (1.44/20), pass to the slot (1.15/20) and attempt shots from the inner slot (2.75/20). In simplest terms, Klingberg runs the powerplay and forwards like Seguin and Benn are the beneficiaries of his solid play at the point.

The biggest disappointment in Dallas was the entire goaltending situation. The Stars had 3 goaltenders count against their cap this year, but only two of them were on the roster. Ben Bishop has a $4.9M dollar cap hit, Kari Lehtonen has a $5.9 dollar hit and Antti Niemi was bought out and has a $1.5M dollar hit. That equates to $12.3M. The smartest teams might spend $8M on goalies so the Stars spending so much more prevents the team from signing a $4M dollar defenseman. When you see that Klingberg has a cap hit of $4.25M you quickly realize that the team is missing out on a potential impact player. Bishop played 53 games and had a .916 save percentage and a 2.49 goals against average. His 5v5 expected goals per 60 was 2.26 and his actual was 2.19. This means that Bishop played well this season and the Stars should move forward with him in net next season, assuming he is able to stay healthy which may be a difficult assumption to make. Lehtonen played to a similar level but the contract situation is a disaster which is why the goaltending situation is listed as a huge disappointment.

Antoine Roussel made a name for himself in the playoffs, but he did not live up to those high expectations this year. He appeared in 73 games but only registered 17 points. The low point production is not that surprising as he developed a reputation as a pest and a defensive minded forward. He was not able to make enough possession driving plays and he did not create nearly as many turnovers as the Stars expected. He only made 6.26 defensive plays per 20 minutes and was only able to block 3.89 passes per 20 minutes. Those numbers are not nearly enough for a player who is in the lineup to play well on defense and create turnovers.

The biggest disappointment on defense was Marc Methot. Methot was signed to a long-term deal at age 32 and only appeared in 36 games. It is tough to knock a player for getting injured but even when he was in the lineup he did not contribute nearly enough. He has the reputation of being defensive minded, so his 3 points are not a big issue. However, his 47.8% Corsi is cause for concern because it is well below the team average. He was a physical presence but when he recovered the pucks his pass success rates were poor, falling below 60% success. The Stars will need Methot to stay healthy and improve his play next season or they will be on the hook with a bad contract.

The Stars will head into the offseason with about $17.5M in cap space. Antoine Roussel and other bottom six forwards are pending free agents, so the team will not have to break the bank to resign those players if they choose to do so. John Klingberg is signed to a team friendly deal for the long term, but three other defensemen are pending free agents. Luckily, only one of the players had a 2017 cap hit of more than $1M but that player is the 35-year-old Dan Hamhuis who the team could let walk due to his old age. The team will have to dive into the free agent pool to sign defense and depth forwards.

Assuming the team does fill those needs the big question emerges, what does the team do with Tyler Seguin? He figures to get a deal comparable to the $9.5M that Benn is making. He is under contract for next season but if I were running the Stars I would look to lock up Seguin as soon as possible. A player of his age and skill level should never see free agency and the Stars have the space to sign Seguin now and having his contract on the books will make it much easier to negotiate with free agents after the upcoming season. Signing Seguin gives the Stars a solid core to move forward with for years to come.

The team will need to sign a backup goaltender as well because Kari Lehtonen and his large contract is coming off the books. The management must be excited by this because this means the team will save millions of dollars. Spending $5M on a backup goalie in this day and age is crazy and saving that money should help the Stars right away.

The Western Conference is strong, and the Stars play in a good division, but they look like a team who should be able to compete for a playoff spot year in and year out. They have offensive talent and good possession numbers. More cap flexibility should allow the team to bolster up their back end and improve their team heading into the 2018-2019 season.

Please be sure to check in again tomorrow as we take an in-depth look at the St. Louis Blues. If you enjoyed this review, please follow us on Twitter, @afpanalytics, and share it with your friends!