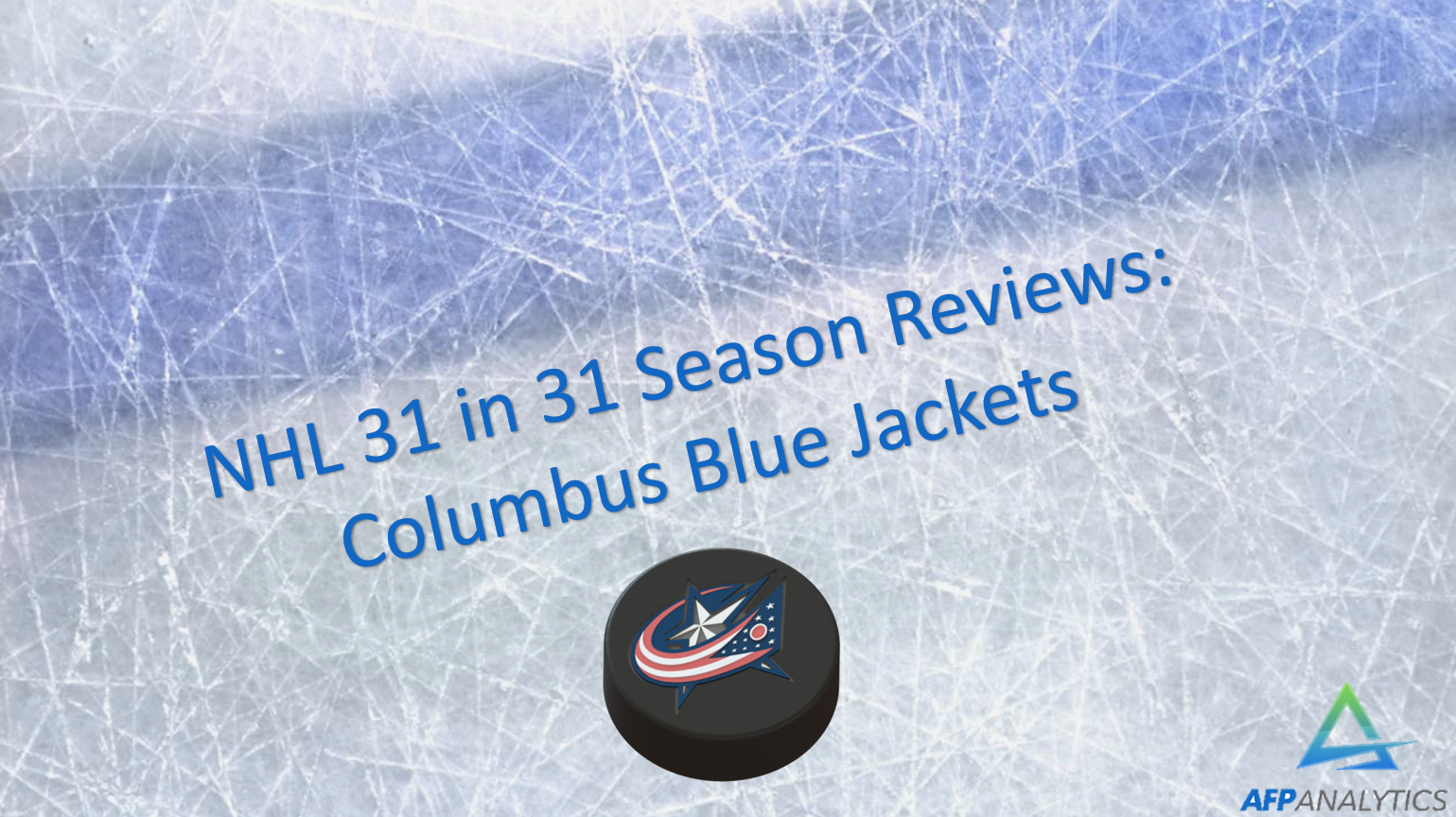 The Columbus Blue Jackets are an interesting case study in how a team can change a member or two of its “core” and still be successful. The team followed up a successful 2016 campaign with another playoff appearance in 2017. This year the team had to be hopeful to advance past the first round, especially after taking two games to zero lead against the Capitals. However, the team fell short of advancing and will have to answer some tough questions this offseason.

The Artemi Panarin trade is looking more and more like highway robbery. The Blue Jackets got a top offensive talent and Panarin showed no signs of slowing down in 2017. He is one of the most exciting players to watch with the puck on his stick and his advanced statistics support the eye test. His offensive zone play is nothing short of spectacular, he is great on the rush and off the cycle. All his pass rates are among the best in the league, he averages almost two passes to the slot per twenty minutes and his success rate is 45.2%. The number may not seem impressive at first look but once you think about the emphasis that is placed on defending the slot the number quickly becomes more impressive. Panarin’s skating and playmaking is where he truly excels. He has 6.13 controlled zone entries per twenty minutes and 31.7% of his offensive zone entries result in a scoring chance for the Jackets. There is not much to say about Panarin that has not already been said, he is a special talent and the Blue Jackets are fortunate to have a player like him.

Another young player who took a huge step forward this season in Columbus was Pierre-luc Dubois. The former number three overall selection had a fantastic season. The Blue Jackets are a good possession team and Dubois was no different. He has a Corsi for percentage of 55.4%, not too bad for a 19-year-old. He is a great passer and playmaker off the cycle, his pass to the slot success rate (45.8%) was even better than Panarin’s. One area of his game that could be improved is his physical play, his recovery rates are not on par with other forwards who scored like he did, but that can easily be written off because of his age and the fact that he may not be done developing physically. With that being said, he was responsible in his own end which is a great sign for such a young player. He blocked 5.14 passes per 20 minutes and denied more than half of the controlled entries against him.

The last young forward worth mentioning is Oliver Bjorkstrand. While he may not the media love that some of his teammates get the 23-year-old was a key contributor to the Blue Jackets success. He excelled on the forecheck and the cycle. He made more than 7 north/south cycle passes per twenty minutes and received nearly 10 passes in the offensive zone per twenty minutes as well. The Bjorkstrand line figured to be a key contributor to the Blue Jackets 9th ranked Corsi for % (51.49%).

Now let’s shift the focus to the back end, the Jackets have two young defensemen that played well and played big minutes. Seth Jones and Zach Werenski are among the best young players in the league and should be a staple on the Jackets blue line for years to come. Jones is only 23 years old and was in the Norris trophy discussion this season, and his numbers illustrate why. His stretch and outlet pass rates are both close to 70% success which is fantastic and allows players like Panarin to excel off the rush. Jones is a point producer on the powerplay and is responsible defensively as well. In other words, he is the prototype defenseman that can play in all situations and is great with the puck. Werenski is not as strong defensively but the Blue Jackets did an excellent job starting him in the offensive zone where he would be able to succeed. He also saw plenty of powerplay time and has an elite shot that is a weapon from the point and on the off wing. Shot success rate is a measure that determines what percent of a players shot attempts result in a scoring chance. Werenski had a shooting success rate of 49%, a substantial number for a defenseman. This means that nearly half of his shots get to the net and create scoring opportunities for the Blue Jackets.

Lastly, Sergei Bobrovsky deserves to be mentioned after another strong season. His expected even strength goals allowed was 2.61 goals per game. His actual measure was 1.99, this means he was allowing .62 less goals per game than he was expected to allow based on quality of chances and volume of shots. In other words, he had a great season. He was not one of the best goalies when the team was short handed but his 5v5 play was so great he was able to keep the Jackets in almost every game and belongs in the conversation when discussing who is the best goalie in the game.

It might not be fair to list Brandon Dubinsky as a disappointment because he is asked to paly a specific role and he does a respectable job in his role. He is a defensive minded forward who plays tough minutes against the opponents’ best players. This could explain why his Corsi% was 46.9%, one of the worst on the team. Unfortunately, $5.8M for 6 goals and 10 assists in 62 games is simply not a smart investment. The Blue Jackets could find a player for $1M or $2M who could play a similar role. Boone Jenner is another player who fits this bill, but he is on a much more manageable contract. The Blue Jackets could have been expecting Jenner to take his game to the next level, but it looks like he has already peaked.

Another player that must be listed here is Josh Anderson, he is not listed here because of his production. Instead he is listed here because of what could have been. The Blue Jackets left both Anderson and William Karlsson unprotected in the expansion draft and the Jackets made a deal with Vegas to incentivize the Golden Knights to take Karlsson instead of Anderson. Of course, hindsight is 20/20 but even half of Karlsson’s production would have looked better than the 19 goals and 12 assists that Anderson produced.

The Blue Jackets did have players who failed to meet expectations on the ice in 2017. Jack Johnson only produced 10 points and had a 47% corsi for. Of course, his offensive zone start percentage of 30% is much lower than Jones or Werenski but his defensive statistics were not very impressive. He only blocked 4.81 passes per twenty minutes and was able to deny just 43.6% of zone entries. I would expect a player who is thought to be a shutdown defenseman to have much better defensive based statistics.

Some of these disappointments may seem nitpicky, because the Blue Jackets did have a great season, but every team has areas that they can improve, and the three players specifically mentioned above are players who the Blue Jackets may have expected more from in 2017.

This is where things start to get interesting in Columbus. The Blue Jackets have 11 pending free agents and will enter the offseason with only $13M or so in cap space. The team figures to let players like Thomas Vanek, Mark Letestu and maybe even Jack Johnson walk. The tough decisions come with players like Boone Jenner and Matt Calvert. Jenner is 24 and made $2.9M in 2017 and Calvert is 28 and had a $2.2M cap hit this past season. These two players will not take a pay cut, so it will be interesting to see what the team decides to do. I think I would try to resign both, if you dive into the free agent pool you are going to see players who are comparable to Calvert and Jenner. In the case of the Blue Jackets the team would be wise to try to bring back both players because they are familiar with John Tortorella and his style of coaching. Oliver Bjorkstrand is another one of those players that could be signed in the $2M-$3M dollar range, and I am high on him so the longer the term the better.

The real cap issues are going to come after this upcoming season. The team will have to sign both Panarin and Werenski, so any moves the team makes this offseason should be made with next offseason in mind. If the players are willing Columbus should try to sign one of the players now. They are both proven talents and locking them up sooner rather than later would only make things easier on the front office.

Now let’s wrap up by talking about the elephant in the room. Sergei Bobrovsky only has one year left on his current deal. He is a $7.425M cap hit and he will not be taking a pay cut when he signs his next deal. This may seem like a hot take but if I were the GM of the Blue Jackets I would not be the team to give him that contract. It is not a slight on Bobrovsky, he is a great goaltender it is simply a measure of value. The Blue Jackets look like they are built to be competitive for a long time and they will need the cap flexibility to move pieces in and out of their lineup (ala Penguins). Signing Bobrovsky to a Carey Price like deal would tie up the Blue Jackets and would make a mess of their salary cap. If the team has an additional $5M dollars to spend on a player to bolster their roster the team would still be able to compete with a goaltender who makes $5M instead of $10M.

In conclusion, the Blue Jackets could head in any direction they choose. Perhaps management is not satisfied with the first round exit this season and will look to move on from most of their pending free agents. I would keep the team in tact and wait until next offseason to make any sweeping changes, especially with the contracts that will have to be signed or could come off the books in 2019.

Please be sure to check in again tomorrow as we take an in-depth look at the Philadelphia Flyers. If you enjoyed this review, please follow us on Twitter, @afpanalytics, and share it with your friends!