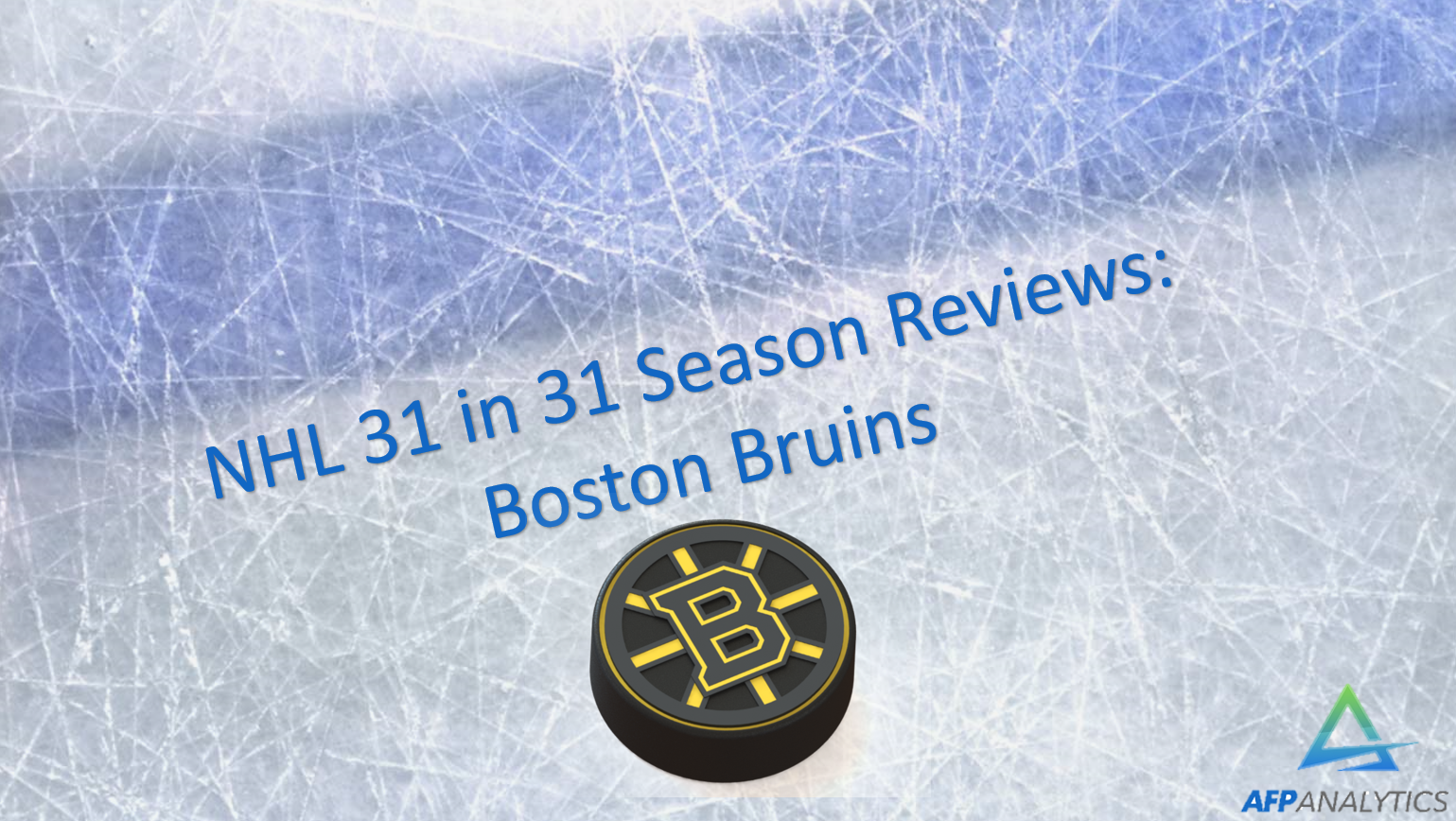 The Boston Bruins have had the same core of players for several seasons now, so it should not come as a surprise that the team was in the postseason yet again. The team outperformed expectations this season thanks to a new group of young players who were able to step up and perform well at the NHL level. Some experts may have felt that the Bruins were heading in the wrong direction, but this past season should lead people into thinking the opposite. The Bruins look like a team that will contend in the Eastern Conference for seasons to come.

The team has been one of the best possession teams in recent memory and a sizeable portion of the credit should go to the usual suspects, Patrice Bergeron and Brad Marchand. Bergeron missed some time due to injury, but he still was able to put up fantastic numbers. As expected, his Corsi% was well above 50% and more than 60% of his touches in the offensive zone were considered successful. The only players on the team who had a better rate were David Krejci and Rick Nash. Brad Marchand has taken a lot of heat in the media after his antics in the postseason, but that should not necessarily take away from the tremendous season he had. Marchand registered 85 points in 68 games and was one of the best playmakers in the league. He attempted 173 shots from the slot, 18 more than the next highest on the team. There is not much else to say about these two players, they are among the best two-way players in the league and are a stabilizing force in the Bruins lineup.

David Pastrnak was the player who attempted the second most shots from the slot and he is quickly emerging as one of the best young talents in the league. The 22-year-old forward played in all 82 games and scored 35 goals and racked up 45 assists. Pastrnak was so successful because more than 40% of his shots came from the slot, he was able to get to scoring areas and a player of his speed and skill is going to put up points once he gets into the high danger areas. Shooting wasn’t the only think Pastrnak was doing well in the slot, 34% of his passes were sent into the slot as well. The Bruins possess the puck more often than their opponents so having players like Pastrnak who can generate offense on their own make the team that much more dangerous.

This next section will highlight a handful of young forwards who emerged and played a key role in Boston this season. Jake Debrusk, Anders Bjork and Danton Heinen all impressed with the Bruins. The players have shown they can play anywhere in the lineup and are a talented group of players to complement the older core group. The trio of players ranked in the top half of Bruins when looking at expected goals for when the players were on the ice. The players are responsible in their own end and are more than capable of putting up points as well. The three combined for 102 points in 177 games, a rate more than serviceable for young players playing the role this group was asked to play in Boston.

Defensively speaking, Zdeno Chara played his usual big minutes and still performed well despite aging and possibly losing a step. Luckily, the Bruins have three other young defenseman who appear more than ready to take some of the load off Chara’s shoulder. Torrey Krug, Charlie McAvoy and Kevan Miller all impressed this season. Krug and McAvoy are the perfect modern-day defenseman. They have speed and skill and are more than capable of being able to contribute offensively. Kevan Miller has the reputation of being more of a stay at home defenseman but even he can help the Bruins offensively. All three of the players had offensive zone pass success rates above 60% and the three were in the top four when it comes to moving the puck out of the defensive zone as well.

Lastly, Tuukka Rask had a fantastic season. His expected goals against average was 2.55 but he outperformed the expectations and only yielded a 2.37. He was in the top third of the league when it comes to controlling rebounds. He only allowed rebounds on 57.5% of the shots he saw. This means that 42.5% of shots on the Bruins net were controlled by Rask and there was no loose puck or second scoring chance for the opposing team. In the simplest terms Rask started 53 games and won 34 of them. Fans in Boston seem to have very extreme opinions when it comes to Rask and I feel like I would fall on the side that supports Rask and thinks that he is among the best goalies in the league.

The Bruins dominated opponents and possessed the puck at an excellent rate, so there will not be many disappointments. However, there are a few contracts on the Bruins books that the management team would probably like to find a way out of. The first player that comes to mind here is David Backes. The team has 3 years left with a $6M dollar cap hit. Backes is already 34 years old and he is no longer playing like he did years ago during his tenure in St. Louis. He really struggled with the puck on his stick, he only controlled 2 entries into the offensive zone per twenty minutes. Perhaps he could have gotten away with this a few years ago but now teams are looking for speed and skill. Unfortunately, Backes has lost a step and his high cap hit makes him a tough asset to trade.

I want to preface this next player with this statement. I have never been a huge fan of David Krejci, when a team goes into a game against the Bruins I do not feel that Krejci is high on this list of players the opposing team is game planning against. He is a serviceable player but $7.25M dollars is a steep price to pay for 44 points in 64 games. Looking through his numbers there really aren’t any that jump off the page in either direction. He looks like a player who should make between $4M and $5M per season. I would never fault a player for getting paid, but the team surely wishes that they could have Krejci on a more team friendly deal.

The team heads into the offseason with only $12M dollars or so in cap space. The team has a handful of free agents that they will need to resign and there are holes to fill in the lineup. Seam Kuraly, Tim Schaller and Matt Grzelcyk should all be brought back on small cap hit deals. This could leave the team with somewhere between $7M and $8M in cap space. Anton Khudobin is a UFA which means the Bruins will be in the market for a backup goaltender as well. Whoever the team chooses to sign figures to cost a few million dollars which means the Bruins cap space is shrinking quickly before the team must make its biggest decision.

The team must resign Nash. The 29-year-old forward was one of the teams’ best penalty killers and showed he had offensive flash as well. Sorry for the confusion, I am talking about Riley Nash, not Rick. The Bruins are best off letting Rick Nash walk. He was acquired as a rental piece to help the team win the Stanley Cup. Unfortunately, the team fell short but with Charlie McAvoy and young forwards like Heinen and Ryan Donato needing new contracts soon the team simply will not have the space to sign Rick Nash. He is already 33 years old and the Bruins have enough forwards that age or older. There is no shame in making the move to try to win the cup, if Rick Nash is allowed to walk this could give the team the cap flexibility needed to possibly make another move at the deadline this upcoming season.

In conclusion, the time for the Bruins to win is now. The team will be a cap team this upcoming season and the aging core is still capable of performing at a high level, but it is not easy to know how long the level of production will last. As the young players continue to develop the Bruins should only get better, but it will be important to win now with players like Chara, Bergeron and Rask still playing at a very high level.

Please be sure to check in again tomorrow as we take an in-depth look at the Nashville Predators. If you enjoyed this review, please follow us on Twitter, @afpanalytics, and share it with your friends!