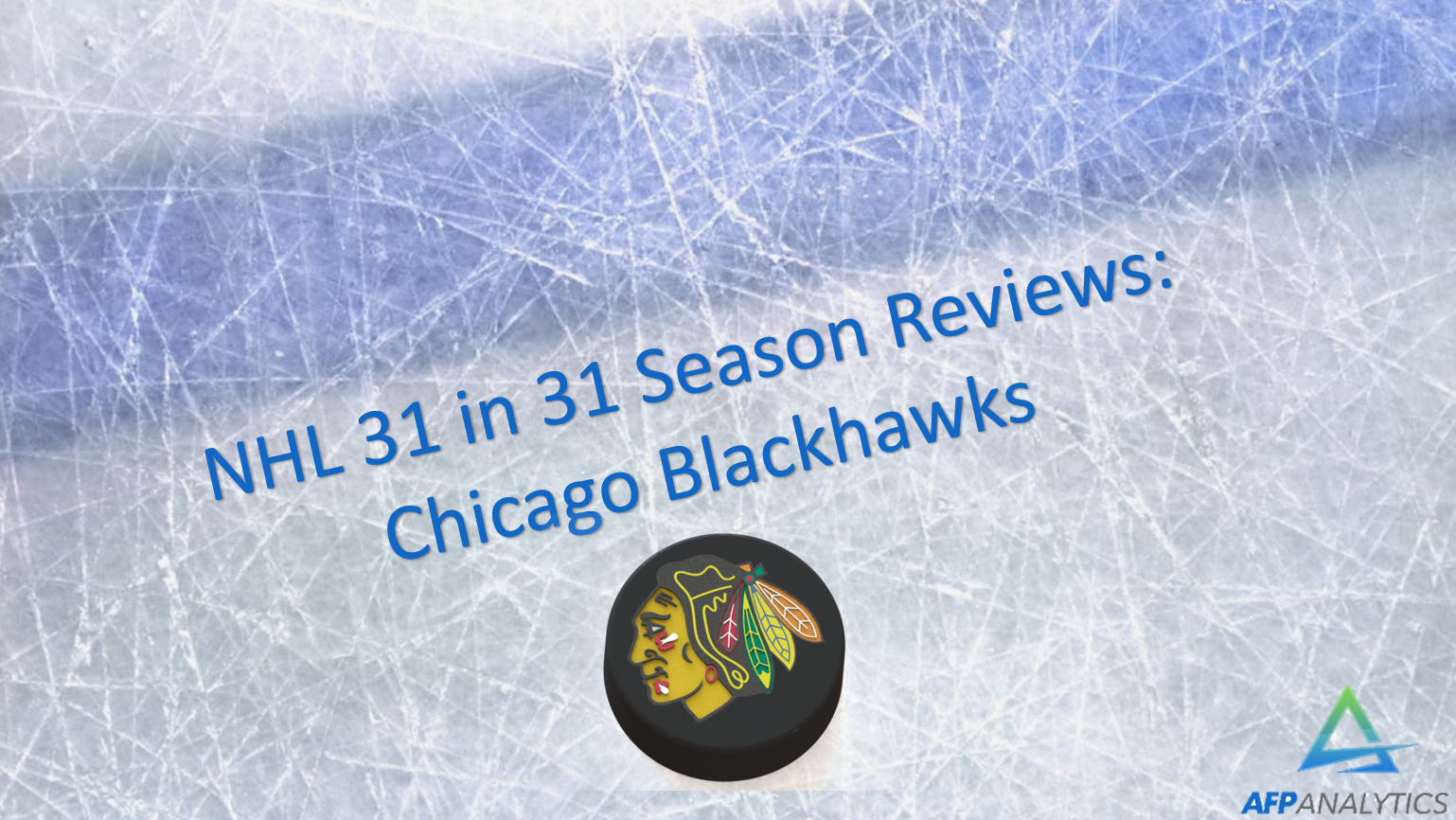 Next up in our 31 in 31 season review is a look at the Chicago Blackhawks, who went from dynasty to bottom of the standings in a very quick time frame. The Blackhawks are an interesting team to look at as their possession numbers say they are still an elite team. Was much of their struggles due to the poor goaltending they received after Corey Crawford was injured (excluding Scott Foster of course). However, the team is saddled with many aging players on long-term, large money contract that will make it hard for the team to really change much up.

I want to start with Alex Debrincat, a player who many people questioned whether or not could be a NHL player. Although I can’t point to anything with a timestamp to back up my claim, I was not one of those people. I find it impossible to believe that someone who dominated a level development league, playing against many players who many observers think will be future NHL players. To me, it seems likely that a player who dominates at the level against his present and likely future opponents, that player will likely be successful. Anyways, I digress and will move on to Debrincat’s performance this season.

Debrincat scored 18 goals at even strength, 28 overall while having a 53.7% Corsi For Percentage. That stat line would be really good for any player, let alone “an undersized” rookie, jumping directly from juniors. If you want to be someone who wants to look for reasons to not like Debrincat, you can point to the fact that he spent the most time with Jonathan Toews as his center, to that I would say, there is a reason the coaching staff put him there: It’s probably because he’s good.

The next major bright spot to look at is Scott Foster, the accountant, emergency goaltender, who somehow had enough free time during tax season to post a third period shutout against one of the league’s best teams. In a season filled with disappointment, especially in the crease, Scott Foster’s overnight fame and success was a great story.

The brightest spot for Chicago this season might have been the trade of Ryan Hartman for Nashville’s first-round pick. Even though the pick will be at the backend of the first round, the Blackhawks desperately need to add top end, cost-controlled, young talent to supplement their aging stars.

I think the obvious place to start is the injury to Corey Crawford, who is probably more appreciated than ever before. The Blackhawks were off to another strong start before Crawford was shut down in December with a concussion, playing in only 28 games. Everyone who replaced him (except Scott Foster), struggled mightily. I think the biggest concern for Blackhawk fans is that it seems like Crawford has really struggled with the effects (and maybe after effects) of his concussion. If he struggles to bounce back next season, the team could be in big trouble.

Do I need to talk about Brett Seabrook? I think I will touch quickly on him. I was surprised to look at the Blackhawks’ salary situation and find out that Seabrook, not Keith or Crawford is the highest paid Blackhawk behind Toews and Patrick Kane. Oh, he also has six more years remaining on his contract with a full no-move clause. The contract takes him until he is 39 years old. As I am sure Blackhawk fans know, Seabrook’s play was, umm, less than stellar. I’ll just leave it at that and spew a few clichés. No need to rub salt in the wound. No need to beat a dead horse.

I don’t know what else to really touch on here. The Blackhawks’ possession numbers were overall good. Their PDO, a stat that adds Shooting % and Save%, and should regress toward 100, was the seventh worst in the league. With a little more “puck luck,” they might have a significant improvement in the standings next year. The biggest hurdle for the Blackhawks next season may be the fact that they are in a division with this year’s two best teams and four other very talented teams.

I don’t know what Chicago can really do this offseason? Pray to the injuries Gods that Crawford and maybe Hossa can return at full strength? The Blackhawks enter the offseason with just under $7.5M in cap space that could deplete even further with any overage bonuses they have to pay out. They are going to have to add at least five forwards within that cap space. Duclair, Jurco, and Hinostroza could be relatively cost controlled as they are restricted free agents. Those players will probably account for a cap hit of around $4M, leaving the team with $3.5M to fill their remaining two spots, one of which is Patrick Sharp, who has found his stride in broadcasting and looks to be done playing hockey.

The Blackhawks are going to have to look to fill out their roster with younger talent. Anthony Louis was the leading scorer for the team’s AHL affiliate, the Rockford IceHogs. It would be logical to think he could get a long look, especially considering the Blackhawks had success with Debrincat, another undersized forward. Though Louis’s 48 points in 70 games isn’t quite the level of production I would want to translate to a sure thing at the next level. He probably projects as more of a bottom six player. Matthew Highmore was the IceHogs’ leading goal scorer, netting 24 goals in 64 games and could be another player to get a look if the team is looking for a player with a scoring touch.

However, I think the Blackhawks’ best plan of action is to see if they can land an impact forward high in the draft that can come in and contribute immediately. They also have to be going hard after any college free agent forwards, who they think can come in and play right away. They could also look to bring one of their European forward prospects into the fold as well. Please note that I am assuming Dylan Sikura will be one of the players to definitely make the team.

The conclusion to come to here is the Blackhawks really need to clear some money. It seems like Artem Anisimov would be the most logical player to be moved to clear some cap space, though that doesn’t necessarily help with their forward depth problem. His salary is and production would be attractive but his No-Move Clause may act as a hindrance. Brandon Saad is another player I could see teams being interested in but it seems highly unlikely he will be traded after trading away Artemi Panarin to reacquire him.

Obviously, the best way to clear cap space would be to move one of their $10.5M men, Patrick Kane or Jonathan Toews, or one of their aging defensemen, Brent Seabrook or Duncan Keith. I think it would be near impossible to move any of those players for a litany of reasons. Though making hockey decisions based on how your fans would react is not the best way to do business, I don’t see how you can sell moving Toews or Kane to your fans. The next problem is it takes two to tango. I think there would be plenty of interest in Toews or Kane, but the massive cap hit would certainly be a major issue. Though I wonder if we hear any rumblings of a Toews to Montreal trade. Moving one of Seabrook or Keith probably means adding assets to move the contract off your books. I’m not sure if Chicago is really in a position to do that again, as that is really what has gotten them into this mess to begin with.

I think a quiet offseason in Chicago might be the best course of action. There might be another season of below-average performance but keeping as much future cap space clear while also building their prospect pool. The team’s underlying numbers suggest a turnaround next season is more likely than not.

Please be sure to check in again tomorrow as we take an in-depth look at the New York Rangers. If you enjoyed this review, please follow us on Twitter, @afpanalytics, and share it with your friends!