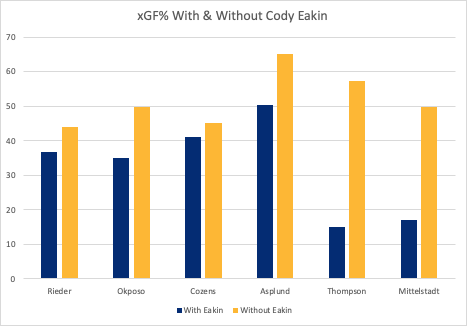 The Sabres are struggling, bad, horrific, abysmal. Let’s settle on abysmal. Sabres fans are rightfully fed up and frustrated. I wouldn’t blame anyone who expresses their frustration so long as they aren’t crossing any lines. No player is blameless but some definitely deserve less blame and other more.

One player over the years who has drawn fans’ ire is Kyle Okposo, who is in the fifth year of a seven-year contract that has a cap hit of $6M per season. Let’s start by being clear, the team hoped for much more from Okposo and I’m sure he hoped to contribute more. Some unfortunate injuries and other health complications along with age led to an incredibly steep decline and has put him firmly on lists of the worst contracts in the league and went from a bona fide top six player to a “bottom line grinder,” a role team ideally fills with players making no more than a million or two.

The past couple games has seen Okposo elevated back into the team’s top six (it could be argued he was on their second line last year). This compounded with the team’s play has really angered fans especially in the wake of Jeff Skinner’s inexplicable benching for three games. Many are wondering how can Skinner be benched but Okposo exempt. The narrative is Okposo has been terrible this year. But has he really? Does he really deserve to be the odd man out? The scapegoat? His line was very effective last year and he was a big reason why. When I’ve been watching (yes I do actually watch the game) I’ve seen Okposo playing very similarly to last season. I’ve been a little confused why he has been the main target of fans’ and some analysts’ frustrations so I decided to take a look at some numbers. To me, the numbers paint a very interesting picture that hopefully will change the opinion slightly on Okposo and direct the ire in a more appropriate direction.

Before I dive into some numbers, I need you as the reader to keep an open mind. I am going to do my best to provide an unbiased discussion. Before we get into the numbers let’s establish a few things. First, I’m mainly looking at 5v5. Second, I’m not looking at individual scoring stats. Yes, you need goals from a $6M per year player but Okposo is far from the only one not scoring and frankly there are multiple players that fans should be more concerned with. Finally, I am not including GF% in any discussion. Again, the team isn’t scoring as a whole and aren’t getting enough saves so everyone’s GF% is bad. Instead, I am going to discuss some underlying shot metrics. In theory, players doing the things that lead to goals will eventually start scoring though the Sabres seem cursed so who knows ¯\_(ツ)_/¯.

Let’s start by looking at how well the Sabres have controlled the shot share (CF%) and shot quality (xGF%) while he has been on the ice. Please note, all stats are 5v5 adjusted from NaturalStatTrick.

Overall, the Sabres have been clearly out played when Okposo has been on the ice. They are only taking 46% of the shots while only having 40% of the quality shots. That is certainly not a recipe for success. Clearly the team is getting hemmed in their own zone and not generating much in the offensive zone. It is easy to stop here and say yeah he’s bad. As I said earlier, while watching the games I felt like I saw a similar player. Again, please stay with me as I investigate further to see what’s going on. Let’s first compare these metrics from 2019 to 2020.

As we see above, there has been a substantial drop in performance! Last year the Sabres actually controlled player when he was on the ice! With the Sabres being less than stellar as a team at generating shots, especially those of quality, it is important to provide a little more context to the graph above. Below, I show the relative stats of Okposo. This shows us how much better (or worse) the team performs when Okposo is on the ice.

We already know Okposo has dropped off in 2020. What we didn’t know before is how much the team improved, especially in shot quality, with Okposo on the ice in 2019. The drop in xGF% Rel from 2019 to 2020 is incredible. To me, this is our first clue in our investigation.

To get a better understanding of what is driving these metrics, let’s take a look at the components of each. We’ll start with looking at shots for (CF/60) and against (CA/60) per 60. We want to ensure we are looking at per 60 metrics to have everything on an equal scale.

WOW! Okposo has been on the ice for nearly the same rate of shots for but have gotten absolutely shelled in shots against. Clearly, the team is spending more time in their own zone with him on the ice this year versus last year. I don’t know how we can place all the blame on Okposo for this. Let’s make this clue two in our investigation. For thoroughness, I will present the quality metrics as well but they paint a similar picture.

Let’s now look at the percent differences in shots for and against with Okposo on the ice versus off the ice in 2019 and 2020. Here, we want to see the shots against metric be negative as that indicates the team is allowing that percent fewer shots.

This further supports what we already have an idea of. The Sabres weren’t necessarily taking more shots with Okposo on the ice but they sure weren’t allowing them. You can take my word that the quality follows a similar trend and because the rates are quite small, I am going to skip presenting them as I would either have to skew the scales or else they would be difficult to differentiate.

We have learned a great deal by just looking at Okposo’s on-ice metrics. We know the team has generated similar offense but has gotten absolutely shelled defensively. We can acknowledge that players naturally decline as they age later in their careers so expecting some drop-in performance is natural. However, it seems inexplicable to me that one player alone can be solely responsible for this sort of defensive decline. To me, we need to take a look at his linemates and here we will find the key clue we are seeking.

To further add to fans’ frustration with Okposo is the coaching staff started him with Cody Eakin and Tobias Rieder then stuck with it game in and game out, even as they completely changed every other line (including bringing players in and out of the lineup) despite the line being the worst in terms of on-ice metrics in the entire league. Finally, Sabres’ coach Ralph Krueger made a tweak and it was promoting Okposo to the second line. It sounds like an odd decision, promoting one third of the worst lines in hockey but as we dive into the numbers, we will see it actually has worked well for the team and oddly enough is one of the better decisions Krueger has made recently.

I could write an article on just Cody Eakin but the short of it is he is a shot quality AND quantity blackhole. I will present two graphs of the on-ice percentages showing a some of the wingers who have played with and without Eakin. I’ve excluded those that have played only a few minutes with and a significant number without. The first graph will show how well the team controls shot quantity and the second shows shot quality. Both graphs have the player with Eakin in blue and without in gold.

These graphs are not pretty. There is only one instance of a player performing better in any sense when he plays with Eakin opposed to when he plays with anyone but Eakin. That instance is Dylan Cozens’ shot share though the quality of those shots gets worse. Any Sabres’ fan still want to place the blame on Okposo? We clearly see a MAJOR problem has developed. Considering NO ONE has success with Eakin, I don’t know why Okposo should be an exception. Now, let’s take a look at similar graphs for Kyle Okposo. Like Eakin’s, blue is with Okposo, gold is without.

We have to be a little careful with sample size here because how strongly Krueger glued Okposo to Eakin and Rieder but Okposo has spent multiple games away from those players now and some clear trends are emerging. First, somehow Eakin and Rieder are worse! Second, outside of Asplund (and Hall’s shot quality), EVERY player has been better with Okposo. To me, the most important one to look at is Eric Staal. Prior to Krueger elevating Okposo, the Sabres were failing to control play with Staal on the ice. After putting Staal and Okposo together, that was no longer the case. It does make sense as both have lost a step but have previously been productive players. Their games seem to fit together. Personally, I would use Mittelstadt on the left wing and play them more as a third line but Hall hasn’t suffered playing with them either.

For thoroughness, I do want to present the same graphs from above but expressed in relative metrics just to account for the team’s overall drop in play. Eakin’s with, without will be first, followed by Okposo’s. Please note Thompson and Mittelstadt were removed because their relative numbers with Eakin were so poor they broke the scaling. The Sabres were >20% worse when they were on the ice with Eakin.

The relative metrics do absolutely nothing to change the narrative I have already presented for Eakin. The same can be said of Okposo.

So, what have we learned? Well… Cody Eakin is bad. Really bad. If you as a Sabres’ fan wants to express frustration over a who should be scratched, I strongly recommend you lessen your questions about Okposo and start asking about Cody Eakin. If asked, I’m sure Krueger would say they need Eakin for penalty kill or faceoffs. Okposo in a very limited sample has been very good on the penalty kill so swapping him for Eakin might actually improve that area of the game too. I will give Eakin credit for winning 54% of faceoffs. However, both Dylan Cozens and Riley Sheahan have won over 60% of the faceoffs they have taken (Cozens has only taken 26) so that could easily be replaced too. The Sabres should absolutely have been scratching a veteran player from the worst line in hockey but Okposo isn’t it. Cody Eakin is. If I were creating the forward lines I would roll with:

What do I know though? I’m just a guy with an Ivy League degree.