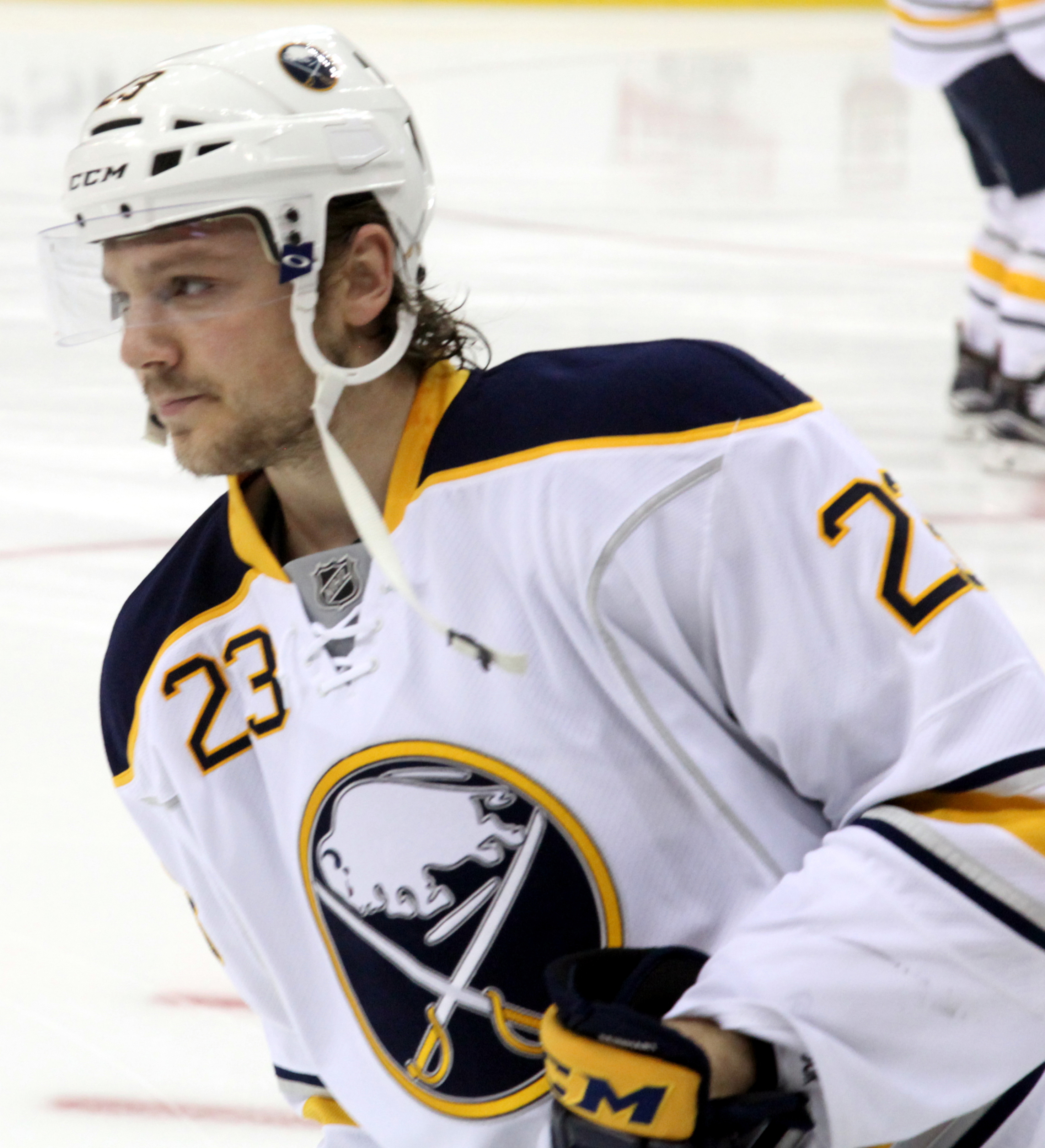 Anyone who follows me knows I am an unabashed fan of the way Sam Reinhart  (#23) plays hockey. I think the Sabres made a big mistake in not signing Reinhart to a long-term contract this offseason. You can read my thoughts on bridge contracts here and Sam Reinhart’s contract specifically here. I know there are many Sabre fans and even media members who cover the team that would strongly disagree with me on the value of Reinhart. Many people question if he is a borderline bust, considering he was a second overall pick and hasn’t produced eye popping box score statistics, especially when considering Leon Draisitl went one pick behind Reinhart. Will Reinhart end up being the second best player in the 2014 draft? Probably not. Is the selection of Sam Reinhart one that was a major miss by general manager (GM) Tim Murray? Not at all. Throughout his career, there will always be questions over how good Reinhart is. This post will break down plays from the first period of the Sabres-Sharks game from November 27th that will show why I am high on Sam Reinhart.

The Sabres got off to a rough start in this game, getting hemmed in their own zone and their top line was in danger of getting caught on the ice for more than a minute until a few subtle but tremendous plays in succession from Reinhart. Let’s start with the first play here. The Sharks are cycling the puck effectively and most of the Sabres are starting to float to the same side of the ice. The Sabres could be prone to one of the Shark defensemen sneaking in for a backdoor play. Reinhart recognizes the wide open ice and moves from his right-wing position to fill the gap where the left defenseman would traditionally cover. I don’t want to blame anyone for a blown assignment because I don’t know the coverage the defenders are asked to play. Maybe this coverage is in line with how the Sabres want to play. After Reinhart drops back to fill the gap, he begins to step up as the play moves to the left (far) side of the ice, quickly working his way into the passing lane. As he moves into the passing lane, he gets his stick on the puck to tap the puck forward and break up the Sharks’ cycle.

The play does not end there. After Reinhart taps the puck forward he quickly moves to recover the puck himself. However, what I love most about this play is what Reinhart does after recovering the puck. Reinhart has a few options. 1) Chip the puck out of the zone. 2 ) Try to flip the puck down the ice. 3) Attempt to skate the puck out of the zone.  4) Make the play he did, which was by far the smartest play. After recovering the puck, Reinhart is headed up ice. He easily could’ve chipped the puck out of the zone and the Sabres would’ve gotten one fresh body on the ice but the Sabres would have lost possession and the Sharks would’ve likely reentered the zone against four tired Sabres. Although this play could’ve been ok, and it’s a play a lot of players would’ve likely made, it isn’t the best player in this situation. The next option is to flip it farther and hope it doesn’t make it down the ice for an icing. It’s probably a 50-50 play whether it results in an icing or not. If it works, the team gets everyone changed and the Sharks get possession to attempt to make it up the ice. If it fails, the Sabres have four tired players and a defensive zone draw to deal with. This is the other play most players would likely try to make in that situation. Option three is a non-starter as the Shark player (it looks like it Erik Karlsson) is quickly bearing down on Reinhart and it would have caused a turnover.

The play Reinhart ultimately made was phenomenal. He recognized that his team needed a change and his other options would likely give the Sharks possession and probably keep some of his tired teammates and himself on the ice to face another Shark onslaught. As Reinhart was about to clear the zone, he turns back and away from the bearing down Karlsson with the puck and skates behind his own net with another Shark hounding him. Reinhart doesn’t panic as he works his way behind the net and neatly flips a pass behind him, off the boards to his teammate, Rasmus Ristolainen. This play allows Ristolainen and the Sabres to maintain possession, complete the change and then work the puck up the ice on their own terms.

On Reinhart’s second shift, the Sabres once again found themselves in their own zone. Here Reinhart makes a nice play along the boards to help the Sabres breakout and move the puck up the ice. One of the aspects I like most about Sam Reinhart’s game is his ability to find space and become a target for his teammates to make a breakout pass. This first play I am highlighting is an example of that. Reinhart positions himself along the boards and takes the pass and carries the puck and then chips it deep into the Sharks’ zone. It looks like the Sabres will lose possession but….

Reinhart makes a neat little poke check on Sharks’ defenseman Erik Karlsson that squirts the puck over to Jeff Skinner.  Skinner moves the puck back to the point, allowing Beaulieu to launch an absolute bomb on goal that Sharks’ goalie, Martin Jones, makes a good save on. Reinhart doesn’t end up with any point since the Sabres don’t score, but this is one of many examples of plays that Reinhart makes that help to drive the Sabres’ offense.

This shift sees Reinhart starting his shift in the defensive zone. The puck ends up popping high into the corner. Reinhart is, of course, the first player to the puck and knocks it down and moves it to his teammate, Johan Larsson (#22), who then moves it to the defenseman. This play allows the Sabres to dictate the play in their own end and eventually work the puck out of the zone.

Later in this shift, Reinhart makes a peak Reinhart play. Here, the Sabres hold the puck in the Sharks’ end by firing the hard around the boards. Reinhart could take one of three paths. 1) Try to cut the puck off by going to the far side of the net. 2) Follow the defender and attempt to play the body. 3) Anticipate where the defender is going to move the puck and get in the passing/clearing lane. As you can see, he chose the third option and stole the puck to help the Sabres continue their zone possession in the offensive zone. I absolutely love seeing hockey plays like this. It is so subtle but so impressive in seeing someone with elite hockey sense make a play like this.

This was an absolutely incredible shift from Sam Reinhart that ends with a near goal that would’ve been on highlight reels across the US and Canada. Let’s start with maybe the two most important plays Reinhart made this shift, both happening in quick succession and shown in the same gif below. The play starts promising with Sabre defenseman Jake McCabe (#19) looking to start an offensive zone cycle. But McCabe passes behind Reinhart with three Sharks ready to break up ice. If Reinhart doesn’t get a piece of the puck, the Sharks are going to streak up ice for a glorious scoring chance. Although Reinhart isn’t able to maintain possession in the zone he does kick the puck forward enough to prevent the Sharks from getting a clean fast break up ice and it allows himself and Ristolainen to recover and get in position to defend.

As the Sharks move up the ice, Reinhart looks natural playing defense (he did play some in his teenage years) and him and Ristolainen pair to break up the Sharks’ rush and move the puck up ice. Ristolainen gets enough of the puck to force an errant pass that Reinhart scoops up, turns away from the pressuring Shark and passes the puck up ice (though the pass ends up being slightly off). Also, Sabre fans should be excited to see the speed Jack Eichel (#9) shows on the backcheck.

The shift carries on only to see another tremendous play by Reinhart, this time setting up Jack Eichel for a quality scoring chance. Here Reinhart shields the puck while spinning away from the Sharks defender. He then slides a pass between two Shark defenders to a wide-open Jack Eichel. Unfortunately for the Sabres, Eichel is a little too wide and doesn’t have a good angle but it is still a dangerous chance off a fabulous setup.

Reinhart ends this shift with a near goal on a highlight reel play. Anyone who was watching this game probably remembers this play and many others have also likely seen it. I think the play speaks for itself. Here Reinhart shows the skill expected of someone drafted second overall. I will note that Reinhart does a tremendous job once again of finding open space on the ice to give Eichel an open target.

Although this is not Reinhart’s final shift in the game, it is the last shift I am going to highlight a play from. By this point, you probably know what this play is going to involve. Reinhart finds open space on the ice, takes an outlet pass, and makes an insanely awesome cross-ice pass to a streaking Jack Eichel. I’ll let you appreciate the pass.

Although this is a small sampling of hand-picked plays where Reinhart looks good, I think it does serve the purpose of highlighting the types of plays that Reinhart makes on a regular basis. One place where Reinhart needs to continue to improve is his game to game consistentcy. There are definitely games where he does not play at an acceptable level. However, I challenge anyone who only looks at Reinhart’s box score statistics to closely watch Reinhart play shift by shift. The only season in Reinhart’s career that the Sabres have performed worse in terms of shots when he was on the ice was when he played nine games in his “rookie slide” season. Anyone who wants to dismiss what the numbers indicate and want to “watch” the game when evaluating Sam Reinhart, I challenge you to do just that and I hope you appreciate what Sam Reinhart brings to the table and why he was a really solid second overall selection.