Clayton Kershaw: Should he opt out? 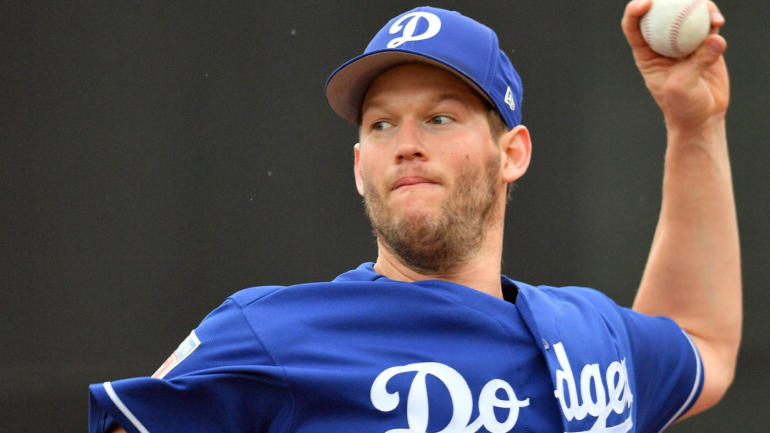 Clayton Kershaw: Should he opt out?

As MLB free agency heats up, we wanted to assess the decision Clayton Kershaw will has to make in the next few days. Should he opt out with the hopes of securing more money, or would be keeping his $65M guaranteed the smarter decision?

With the World Series wrapping up, both Clayton Kershaw and the Los Angeles Dodgers have a big decision to make. Our projections lead us to the conclusion that Kershaw’s best option would be to opt out and re-sign for six more years. To project his contract, we first started with taking every left-handed pitcher since 1980 and clustering them into four different groups and focusing in on Kershaw’s cluster. From there, we removed any outliers or pitchers who had one season appear in the cluster. After we found all the comparable players, we made an aging curve, plotting age against WAR that is shown below.

With a curve established we undertook some proprietary adjustments to create an individualized aging function for Kershaw,  which allows us to project his WAR and subsequently a potential contract with the combination of Cost per War (CPW). To calculate Cost per War, we started by collecting every starting pitcher that was an unrestricted free agent for the past five off-seasons. Then we were able to take a weighted average of each players performance for the last three years in terms of WAR and divide it by how many years their previous contract was to get their Cost per War. After finding each player’s CPW, we averaged the total Cost per Wars to find what teams have been willing to pay in the open market for one WAR each of the past five seasons. We then projected CPW over the next ten years using an inflation rate of 10%. The year-by-year CPW is shown in the table below 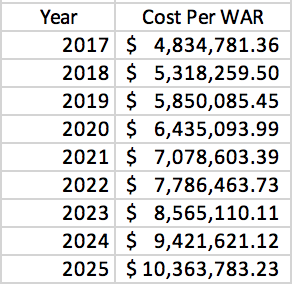 If we were advising Clayton Kershaw and his agent, we would recommend opting-out of his current contract as we have calculated his market value to be a 6-year contract worth a total of $282M. Additionally, we believe he should be able to secure a two year contract that would pay him an additional $10M over the next two seasons.

If we were the Las Angeles Dodgers, we would try to get Kershaw to stay on his original contract and not opt-out. Not only would this save them money now, it would also likely put them in a better negotiation position in 2020 when Kershaw’s current contract expires, as Kershaw’s play will likely level off or possibily begin to decline

We also acknowledge that the contracts may be a bit high, but we also think that the numbers are still reasonable with how league contract values are trending up. The cause for our likely high projections is the use of a 10% inflation rate, which is likely higher than what will actually occur.

For these projections we used data from both Fangraphs and Baseball Reference.

ZACK RYAN is an intern AFP Analytics. Zack is a junior at St. John Fisher College where he is working toward a degree in Sport Management and a minor in Data Science. He has been a part of the Fisher Analytics team the past three years and continues to gains experience in the analytics field.