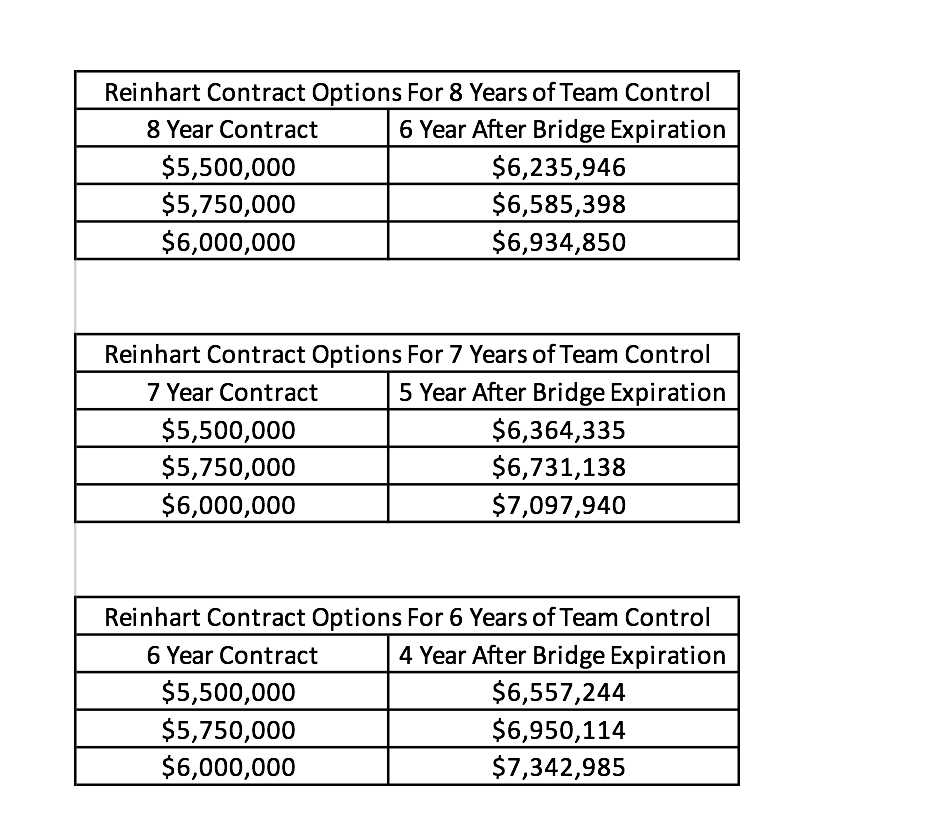 If you have followed along with our work this summer, you will know I think teams are making poor financial decisions when they sign their restricted free agents (RFAs) to bridge contracts. We gave a presentation on this concept at the 4thRIT Sports Analytics Conference. You can view our talks and slides here

We also have a write up on this concept here. One of the examples we discussed was the Buffalo Sabres’ Sam Reinhart. We argued that financially the Sabres should only look at long-term options based off of our market value of Reinhart. What we didn’t anticipate was Reinhart signing a bridge deal for as low as he did ($3,650,000 average annual value (AAV)).

It is my belief that teams should operate in a manner in which they minimize the cap hit of player’s in today’s dollars. I would suggest reading our extended post if that statement sounds like a foreign language to you. Basically, I believe teams should look at the entirety of the contract when making the decision. When the Sabres and Reinhart were in discussions, I am sure they were talking about both short-term and long-term contracts (six plus years). The question we want to answer is what contract would Reinhart need to sign in two years to have the same total cap hit in today’s dollars compared to a potential long-term contract today. Without being privy to the contract discussions, I don’t know what type of long-term contract structure was being discussed but I imagine the length was somewhere between six and eight years with an AAV between $5.5M and $6M. Maybe I’m wrong but I think looking at these possibilities will give a quality assessment of whether the Sabres made a smart move or not.

Below are three tables, looking at Reinhart being with the team for six, seven, or eight years. In each table, we then have looked at three potential AAVs for each timeframe. The amount indicated in the second column is the amount the Sabres would have to sign Reinhart to in order have the same total cap hit, in today’s dollars, for each contract option. You should interpret it this way: After Reinhart’s bridge deal expires, can the Sabres sign Reinhart to a contract less than the amount shown? If the answer is yes, then they have handled Reinhart’s negotiation correctly. If the answer is no, the team will have cost themselves cap hit, in today’s dollars by signing Reinhart to the bridge contract.

Anyone who knows me or has followed me on Twitter knows I am a big fan of Sam Reinhart. I think he is as important to the Sabres’ future as the likes of Jack Eichel and Rasmus Dahlin. As such, I think the smart move would have been to lock Reinhart up long-term immediately. However, with the Sabres locking Reinhart up to a bridge contract with an AAV much lower than I originally anticipated, I think the Sabres’ decision is defensible. I still don’t love it because the team is likely to have the cap space in the next two seasons to absorb a higher Reinhart cap hit now than in the future when they will likely have to pay Casey Mittelstadt and Dahlin (three years). However, I do think it is reasonable for the Sabres to gamble that they will be paying Reinhart close to the values I have detailed in the tables above. My guess is the Sabres’ long-term offer was close to the six-years, $5.75M AAV. As such, I think it’s reasonable to think a four-year contract in two years just shy of a $7M is very possible.

We will continue to update our bridge contract analysis in future posts. Please follow us on Twitter (@afpanalytics) so you know when those are up.