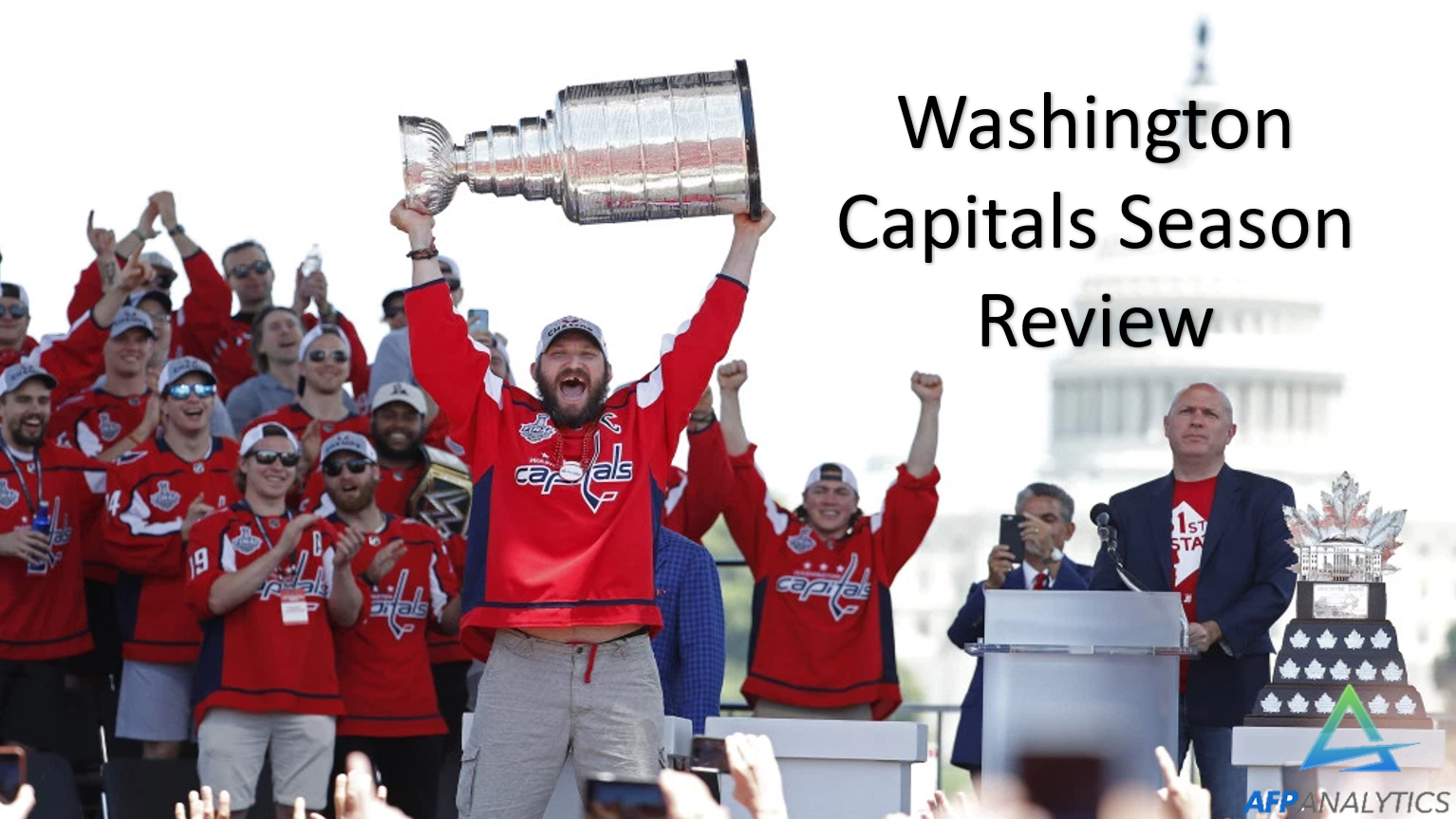 Next up in our 31 in 31 season review is a look at the Stanley Cup Champion Washington Capitals. This is also our final team review. Before we get into the review, I would like to thank everyone who has taken any time to read our reviews and gave us a follow. As a new company, we appreciate the support and we hope you will continue to follow along with our work as we have some exciting things in store (which I will tease at the end). With that let’s get into the Washington Capitals’ review. I wonder if Ovi is sober yet?

The team won the Cup and we saw maybe the greatest championship celebration in the history of sports. What’s not to like? I could wrap this up quickly and leave it at that but I will go ahead and highlight some players. I am not going to highlight Ovi’s strong playoff play because it should not come as a surprise to anyone who pays attention that he was once again strong in the playoffs. If you don’t believe me, check out our piece on it.

I think the place to start is with one of Washington’s lesser-known defenseman who was tremendous during the regular season but struggled in the playoffs. Christian Djoos led all Capital defensemen in Corsi For % Relative in the regular season during 5v5 play and was just behind one of the Capitals’ young stars, who I will get to in a little. When Djoos was on the ice, the Capitals’ shot metrics improved by approximately 5%. The better news for the Capitals is Djoos is under contract at $650,000 for another year, which is critical for the team as they enter this offseason with a tough cap situation.

The next player to highlight is Andre Burakovsky, who somehow was a healthy scratch in the playoffs. Yes, I understand he may have had a few rough games after coming back from his injury but he was the biggest difference maker in driving shots for the Capitals both in the regular season and the playoffs. In the regular season, he was the only player better than Djoos in terms of driving shots (also with a Relative Corsi For % just above 5%). In the playoffs, the Capitals controlled the shot counter 6.53% better, best on the team! He also scored at a rate of 1.67 points per 60 during 5v5 play in the regular season. The team probably didn’t have the cap space to lock Burakovsky up long-term, but they are likely going to regret doing so. He should be one of the team’s future young stars and the Capitals would be wise to build around him.

The final player I am going to highlight is definitely a controversial pick. For his play only, Tom Wilson was very good, especially while playing top line minutes. I do have to pause and say that his reckless and sometimes dirty style of play needs to change. It’s a shame that too many of these players who have talent and skill cross the line too many times. I wrote about Matthew Tkachuk being in the same boat. Brad Marchand is, of course, another player who falls into this category. Getting back to Wilson’s play, he was often paired with Alex Ovechkin and the two of them formed a formable duo, combining for a Corsi For % of 51.88% when playing together. When the players were apart, both fell below 50%. The team also controlled the shots 3.41% better when Wilson was on the ice. Wilson is a restricted free agent with arbitration rights this offseason. If you’re going to look purely at Wilson’s statistics, especially some of his shot metrics, Wilson could fetch a nice contract this offseason. However, his suspension history for his reckless and dangerous play certainly could work against him.

Should I pick the low hanging fruit here? Of course, I should! Brooks Orpik was, ummmm, not good. For a player who is counting $5.5M against the salary cap, you would expect to get a player who at worst has a Relative Corsi For % of 0, meaning the team doesn’t get any worse when they are on the ice. When Orpik was on the ice, the team was 5.46% worse. Yikes! For a team strapped for salary cap space, Orpik’s cap is a near killer. I would also be willing to bet that Orpik doesn’t get much better next year and more likely will get worse.

Frankly, there really isn’t much more to touch on here. Jay Beagle was not good for Washington but also wasn’t paid that much. Braden Holtby struggled for stretches in the regular season but earned his pay in the playoffs. The same could be said for Kuznetsov. I guess it’s kind of hard to find many disappointments on the best team in the league. They probably don’t lift the Cup if they did.

This is where things get interesting for the Capitals. Keeping championship teams together is not easy. In order to win, you usually have to spend and it also likely means bringing in rental players for the stretch run. Eventually, it catches up with you. Last season it began to and this offseason might really sting. This season they were able to fill out their roster with some of their young, talented players who were clearly NHL ready. I’m not sure if they’re going to be able to do that again next season as they just don’t have an overly exciting prospect pool. The team will likely have around $17M in cap space, needing to sign two forwards and two defensemen and then fill out their final three roster spots.

The team’s first decision will have to be on Philipp Grubauer, who had an excellent regular season (I could have highlighted him in the bright spots section) but struggled in the playoffs, is a restricted free agent with arbitration rights. He is also a year away from unrestricted so the Capitals really have to make a decision this offseason. I think trading Grubauer is the smart decision. Holtby has a partial no-move clause and a $6.1M cap hit for two more seasons, which isn’t terrible but also likely won’t have teams lining up with offers that will blow the Capitals away. He also would serve as a great bridge to Ilya Samsonov, the team’s likely goalie of the future. I still don’t know why the team used a first-round pick on a goalie but that’s a story for another day. I think Washington would be wise to try to flip Grubauer for a young, NHL ready player who can add some lower line depth for a small cap hit. I wonder if Grubauer to Buffalo for Zemgus Girgensons and the 32ndoverall pick could make any sense. Another destination that would make sense is the New York Islanders and I wonder if they would be willing to part with Josh Ho-Sang (or if Washington would be interested). I think he would be an awesome add for Washington. Regardless, I would expect Grubauer to get traded before or during the draft.

The biggest decision Washington has to make is on John Carlson. Carlson’s underlying statistics don’t suggest he is in the elite defenseman tier but will definitely get paid like he is. To be honest, I have always been a big fan of Carlson. There is just something about his style of play that I like. He could play on my team any day. If Carlson stays in Washington, it will be because he signs for less than he could get on the open market. It’s not out of the question but seems tough without clearing out some cap space. I’m looking at you Brooks Orpik. Buying out Orpik might be a necessity if the team wants to keep Carlson (or really have any cap flexibility), but I’m not sure I would bet on it due to the intangibles he is perceived to bring to the team. Doing so would result in cap savings of $3M.

The decision on Carlson will likely have some barring on what they decide to do with Michal Kempy, a player who is probably underappreciated for what he brings to the table. Kempy isn’t going to light up the stat lines but is going to drive a team’s shot metrics and is, therefore, a valuable piece as a bottom four defender. His playoff success is probably going to drive up his market value (right or wrong). I think Washington would be smart to keep Kempy regardless, but also recognize it will be tough if they retain Carlson. A defenseman who could be a tremendous fit as a replacement for one of Carlson or Kempy for Washington is Andrej Sustr, a nearly identical player to Kempy who plays the right side.

The good news for Washington is they should have no problem going into next season with a nearly identical forward group, that will likely only see the bottom line depth players change. The question is whether that group will be good enough to do it again. Considering the puck luck Washington got in the playoffs, I’m not sure it is. However, good luck doing much about it. Washington’s main offseason struggle is definitely their blueline. Buying out Orpik seems like a necessity. I think the team needs to retain Carlson and Kempy as well. In reality, the team should have the cap space, at least in the short term, to do so. As for goaltending, I think they roll with Holtby and Phoenix Copley next season, which should be a perfectly fine tandem. Now that the team has the confidence they can win, they should go for it again and throw caution to the wind.

If you enjoyed this review, please check out our other 30 reviews. We would appreciate if you follow us on Twitter (@afpanalytics) as we continue to roll out new, cool content. At some point in the somewhat near future, we will be publishing a comprehensive analysis on bridge contracts, that I think can’t be missed. Thank you for reading and remember if anything we wrote comes true this offseason, remember you heard it here first!