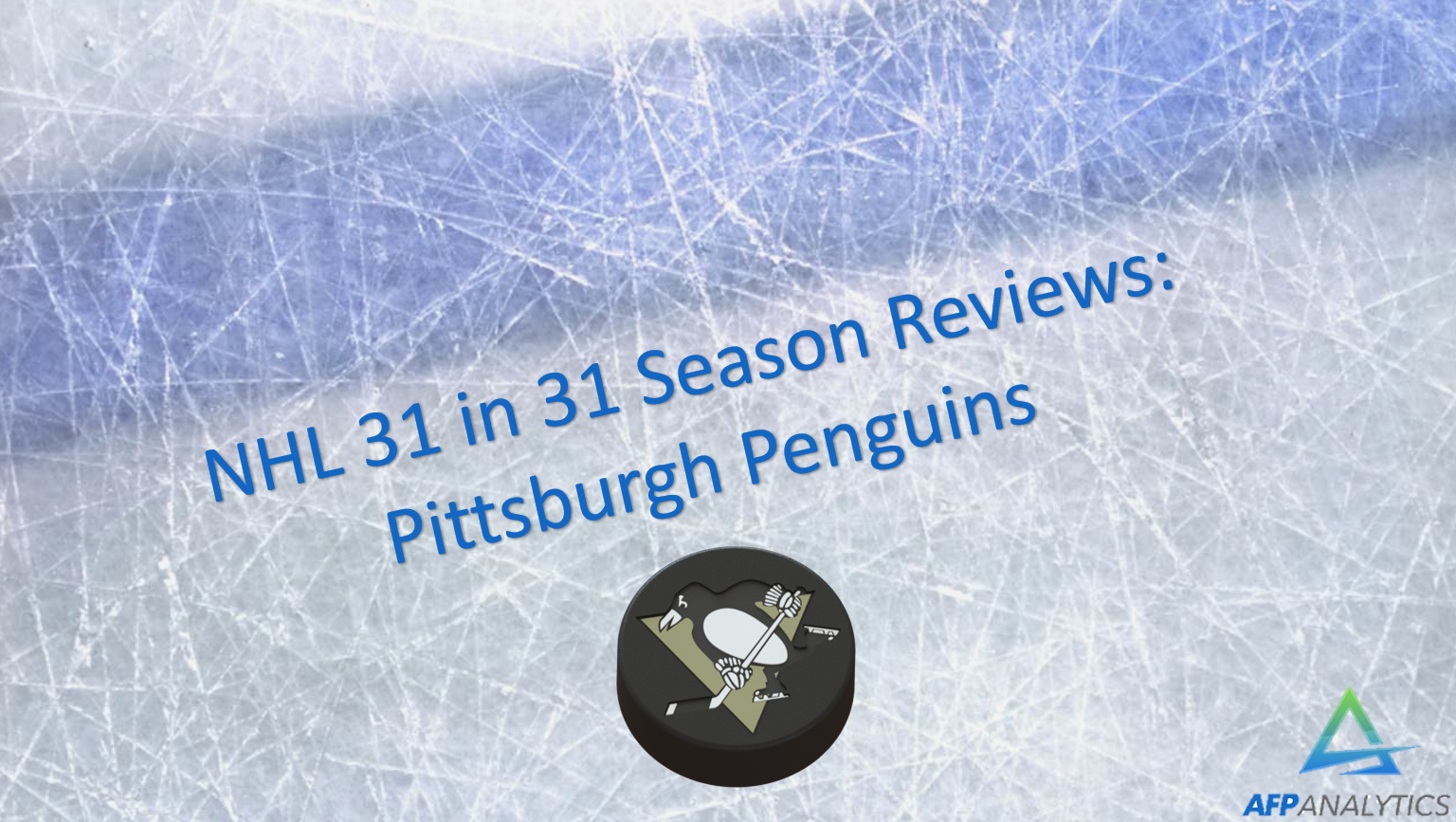 Next up in our 31 in 31 season review is a look at the Pittsburgh Penguins. Coming into the season looking for their third straight Stanley Cup, the Penguins entered the playoffs once again being thought of as cup contenders only to finally be bested by the Washington Capitals. The Penguins struggled at the beginning of the season due to poor goaltending when Matt Murray did not play. They were still too talented of a team to miss the playoffs and talent usually prevails.

If you have been reading along, you will know I reserve this section for players who performed at a level above what was expected or are under appreciated players. Just because I’m not going to provide any in-depth discussion on players like Sidney Crosby, Evgeni Malkin, Kris Letang, etc., it does not mean they had bad seasons. I will highlight players who performed below expectations in the Major Disappointments section. With that disclaimer out of the way, let’s get to it.

Many players on the Penguins get plenty of love but one player I am not sure gets the recognition they deserve is Bryan Rust. I think people look at Rust and think he is a player that gets propped up playing with two of the league’s premier centers. That is actually not the case at all. During 5v5 play, Rust was the Penguins’ best possession forward with a 56.38 Corsi For % and 6% Relative Corsi For %. Rust put up those numbers while not playing with any teammate on a consistent basis. To further demonstrate that Rust’s high level of play was not the result of playing with top players, Rust performed better away from Sidney Crosby and Crosby played better when Rust was on his wing. The same was true for Evgeni Malkin. So, who’s really the superstar? I kid of course its Rust. But really Crosby and Malkin are still the top two players on that team.

The next player I am going to highlight is Brain Dumoulin. Statistically, Dumoulin was the Penguins’ second-best defenseman behind Kris Letang. The most important thing to consider when looking at Dumoulin is he is only being paid $4.1M for the next five seasons. If Dumoulin continues his strong level of play, that contract will look like a steal for the Penguins. Bargain contracts for their top players is what will allow the Penguins continue to be Stanley Cup contenders. During 5v5 play, Dumoulin had a very respectable 53.70% Corsi For % and a Relative Corsi For% of 2.22%, meaning the Penguins performed approximately 2% better when Dumoulin was on the ice versus when he was off. Dumoulin accomplished those impressive numbers while playing on the team’s top pair with Kris Letang. Unlike Rust, there does have to be some concern that Dumoulin was propped up by playing with Letang. While playing away from Letang, Dumoulin had a 49.45% Corsi For %. However, I do have to add the disclaimer that Dumoulin only played approximately 290 minutes away from Letang so sample size certainly could be an issue. Regardless, Pittsburgh is fortunate to have a defenseman who can handle top pair minutes while only being payed $4.1M per season.

Let’s start with the player the Penguins traded their 2017 first-round pick for. A player that you gave up that type of asset for is one you would expect to come in and play at least middle six minutes, probably score around 15-20 goals and maybe produce 40-50 points. The Penguins got Ryan Reaves, who everyone knew would never produce at that level. The Penguins ended up moving Reaves to Vegas to facilitate the Derick Brassard trade. That has to be considered a win! If the Penguins had traded that first-round pick for a better-quality player to begin with, they may not have had to make the move for Brassard and give up another first-round pick. Or better yet, they could have moved the two first round picks for a really good player at the draft so they could have had the player for the entire season. As for Reaves, he pretty much played at exactly the level you would have expected from him.

I think the next area to discuss is the Penguins goaltending. Matthew (Matt) Murray was not that great for the Penguins this season. During 5v5 play he allowed nearly 10 goals below that of an average goaltender. Antti Niemi was terrible in his limited time in Pittsburgh. Tristan Jarry also allowed nearly six goals below average during 5v5 play and was basically average during all play. Casey Desmith, statistically, was the best goalie for the Penguins saving 4.36 goals above average. The Penguins are going to need to see some improved play in net next season. The question is who will be providing that play. I’ll discuss that in a little in the offseason plan for the team.

I am hesitant to discuss Phil Kessel here, but I think I will briefly. First, Kessel was still one of the Penguins’ top scorers during 5v5 play, scoring 2.16 points per 60, a rate ahead of Sidney Crosby. However, the Penguins struggled in their possession numbers when Kessel was on the ice. Kessel had a 50.53% Corsi For %, which is fine when strictly comparing that to other players around the league but it lacks context for the Penguins. The Penguins were 2.74% worse when Kessel was on the ice during 5v5. That is not great especially for a player being paid $6.8M. However, when it comes to Kessel, sometimes you have to take the good with the bad and the good is he still produces goals and when he was on the ice versus when he was off, the Penguins’ goal differential was the same.

Nearly every team in the league would be happy to have the type of season the Penguins had. However, the Penguins aren’t just any team. They expect to be one of the last teams standing and this season they were out in the second round. Sure some of the blame could just go to the fact the team has played way more hockey than every other team the last three years and eventually that extra excursion is going to catch up to the players. The team’s window of opportunity is still probably another three to four seasons and the team has to take full advantage of that. I think the team’s window closes by a trade of Evgeni Malkin prior to his contract expiring. That would probably allow them to retool the fastest as the team will likely be depleting their farm system the next few years to continue keeping their championship aspirations alive, as they should.

Anyways back to this offseason. After the salary cap is officially set, the Penguins will likely have between $9M and $11M in space with five arbitration eligible players (Kuhnhackl, Rust, Simon, Sheahan, Oleksiak), an unrestricted free agent (Rowney, who is likely going to walk), and one restricted free agent of note (Daniel Sprong). The team could likely retain all of those players and be right around the cap ceiling, though that could be tight. To make things easier on the team, they should probably look to move some salary off the books as that will also give them the future cap flexibility to add at the deadline. Phil Kessel’s name has been thrown around as a potential trade candidate. I’m not sure I see a team that Kessel would likely accept a trade to would pay full value for Kessel with the contract he is signed to. I think the team would have plenty of takers if the Penguins were willing to retain around $1.8M in salary, something I’m not sure the Penguins can afford to do. As such, I’m not sure if trading Kessel is really an option this offseason.

I think the logic that applies to Kessel likely applies to other players who would clear large amounts of cap space in Patric Hornqvist, Kris Letang, and Justin Schultz. A combination of their high salary and their no-trade clauses will likely make them hard to move unless the player cooperates. Personally, if I were a player on the Penguins, I wouldn’t be actively helping the team move me off the team. Who wouldn’t want to play on a team that is a constant Stanley Cup contender. As such, I think there are only four possibilities for the team to move this offseason. Those players are Carl Hagelin, Conor Sheary, Matt Hunwick, and Olli Maatta. I think Brian Dumoulin could fit the bill but I think he is too important for the team to lose. Out of all those players, I can’t see teams lining up for Hunwick and I think Pittsburgh has to be careful about further depleting their blueline so I’m not sure if Maatta is a realistic trade candidate unless the team is overwhelmed by any trade offer.

From my perspective, I could see one or both of Carl Hagelin or Conor Sheary traded this offseason. Scott Cullen (@tsnscottcullen) had Sheary moved to Buffalo this offseason in his offseason game plan piece and I think that connection is very logical and will probably be made by many observers this offseason. Sabre GM Jason Botterill was likely instrumental in bringing Sheary to Pittsburgh so he is likely familiar with that player. Another team that might make sense for Sheary is the Edmonton Oilers who could use some depth on their wings.

I think the Sabres plus a team like Vegas could be serious players for Carl Hagelin, if the team decides to move him. Hagelin would be a tremendous fit in Vegas as he fits the speedy style of play they like to play perfectly. Though hockey teams should never be run this way, I feel as if Pittsburgh owes Vegas for helping to facilitate the Brassard trade this season. I also don’t think it would be smart to completely rule out a trade of Bryan Rust as he could end up with a higher arbitration award than Pittsburgh might feel comfortable with. If he were to be available, Arizona could also be a team to throw their hat into the ring.

Overall, I expect Pittsburgh to largely standpat this offseason. They just don’t have the salary cap space to make any big moves and the moves they likely could make are likely moves that will spin the wheels. I don’t see a scenario where the Penguins trade Kessel and then use that space to find a player who would be a vast improvement over Kessel. The same can be said for just about any move they make outside of maybe a Sheary trade. I don’t even think Pittsburgh can do a whole lot in goal either. They probably should roll some combination of Murray, Desmith, and Jarry. As long as those three goalies can be average, the Penguins should be fine. Spending under $5M for their goalies has to be the top priority for the team.

Please be sure to check in again tomorrow as we take an in-depth look at the Minnesota Wild. If you enjoyed this review, please follow us on Twitter, @afpanalytics, and share it with your friends!